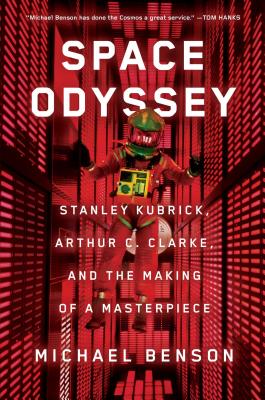 Celebrating the fiftieth anniversary of the film’s release, this is the definitive story of the making of 2001: A Space Odyssey, acclaimed today as one of the greatest films ever made, including the inside account of how director Stanley Kubrick and writer Arthur C. Clarke created this cinematic masterpiece.

Regarded as a masterpiece today, 2001: A Space Odyssey received mixed reviews on its 1968 release. Despite the success of Dr. Strangelove, director Stanley Kubrick wasn’t yet recognized as a great filmmaker, and 2001 was radically innovative, with little dialogue and no strong central character. Although some leading critics slammed the film as incomprehensible and self-indulgent, the public lined up to see it. 2001’s resounding commercial success launched the genre of big-budget science fiction spectaculars. Such directors as George Lucas, Steven Spielberg, Ridley Scott, and James Cameron have acknowledged its profound influence.

Author Michael Benson explains how 2001 was made, telling the story primarily through the two people most responsible for the film, Kubrick and science fiction legend Arthur C. Clarke. Benson interviewed Clarke many times, and has also spoken at length with Kubrick’s widow, Christiane; with visual effects supervisor Doug Trumbull; with Dan Richter, who played 2001’s leading man-ape; and many others.

A colorful nonfiction narrative packed with memorable characters and remarkable incidents, Space Odyssey provides a 360-degree view of this extraordinary work, tracking the film from Kubrick and Clarke’s first meeting in New York in 1964 through its UK production from 1965-1968, during which some of the most complex sets ever made were merged with visual effects so innovative that they scarcely seem dated today. A concluding chapter examines the film’s legacy as it grew into it current justifiably exalted status.

"A detailed and often thrilling account of one intense, unforgettable collaboration. It’s a tremendous explication of a tremendous film. . . . Breathtaking."

"[An] engrossing, immersive examination of the long path to Stanley Kubrick and Arthur C. Clarke's masterpiece. . . . The pair's fraught but hugely successful relationship forms the backdrop of this astonishing tale of obsessive genius at work."
— Ben Dickinson

"Scores of books and videos about '2001' and its director have appeared over the half-century since its premiere, yet it would be difficult to envision anything offering the abundance of telling anecdotes, technical detail and keen insight that fills Benson's Space Odyssey."
— Douglass K. Daniel

“A deep, informative and entertaining dive into the making of the movie.”
— Dennis Overbye

“Enlightening. . . . A solid companion piece to a sci-fi classic, both for newbies trying to figure out the movie's existential questions and longtime HAL lovers who want to know everything about two guys and their grand movie mission.”
— Brian Truitt

"A HAL of a good story."
— Sloane Crosley

"[This] thoroughly researched, multivoiced narrative should become essential reading for anyone wanting to penetrate the mysteries that continue to swirl around this work and its creator. . . . Without trying to be a biography, it also grants us much insight into the enigmatic director of one of the most compelling science fiction visions in the history of the cinema."

“Kubrick’s risk-taking is the through-line of Michael Benson’s Space Odyssey, an omnivorously curious account of how the movie came to be. . . . An enlightening and entertaining narrative rich in both pointed anecdotes and lucid technical expositions.”
— Geoffrey O’Brien

"Benson's book is fascinating, every page startles, and it’s a much-needed and comprehensive history of the making of 2001."
— A.S. Hamrah

“Writer/photographer/filmmaker Benson provides a highly detailed, comprehensive account of the 1968 film. . . . And methodically documents how Kubrick drew inspiration from a range of sources to adapt for the screen. By the end, [he] makes a compelling case that 2001: A Space Odyssey is both uniquely Kubrick's film and utterly original.”
— Library Journal (starred review)

Michael Benson works at the intersection of art and science. An artist, writer, and filmmaker, he’s a Fellow of the NY Institute of the Humanities and a past Visiting Scholar at the MIT Media Lab’s Center for Bits and Atoms. In addition to Space Odyssey he has written such books as Cosmigraphics: Picturing Space Through Time, a finalist for the Science and Technology award at the 2015 Los Angeles Times “Festival of Books.” Benson’s planetary landscape photography exhibitions have been shown internationally. He has contributed to many publications including The New Yorker, The New York Times, The Washington Post, The Atlantic, Smithsonian, and Rolling Stone. Visit Michael-Benson.com.
Loading...
or
Not Currently Available for Direct Purchase