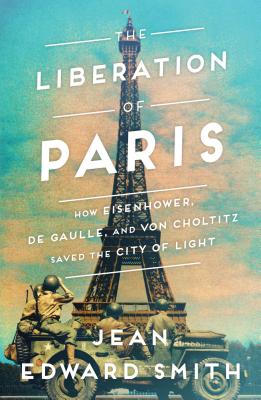 The Liberation of Paris

How Eisenhower, de Gaulle, and von Choltitz Saved the City of Light

Prize-winning and bestselling historian Jean Edward Smith tells the “rousing” (Jay Winik, author of 1944) story of the liberation of Paris during World War II—a triumph achieved only through the remarkable efforts of Americans, French, and Germans, racing to save the city from destruction.

Following their breakout from Normandy in late June 1944, the Allies swept across northern France in pursuit of the German army. The Allies intended to bypass Paris and cross the Rhine into Germany, ending the war before winter set in. But as they advanced, local forces in Paris began their own liberation, defying the occupying German troops.

Charles de Gaulle, the leading figure of the Free French government, urged General Dwight Eisenhower to divert forces to liberate Paris. Eisenhower’s advisers recommended otherwise, but Ike wanted to help position de Gaulle to lead France after the war. And both men were concerned about partisan conflict in Paris that could leave the communists in control of the city and the national government. Neither man knew that the German commandant, Dietrich von Choltitz, convinced that the war was lost, schemed to surrender the city to the Allies intact, defying Hitler’s orders to leave it a burning ruin.

In The Liberation of Paris, Jean Edward Smith puts “one of the most moving moments in the history of the Second World War” (Michael Korda) in context, showing how the decision to free the city came at a heavy price: it slowed the Allied momentum and allowed the Germans to regroup. After the war German generals argued that Eisenhower’s decision to enter Paris prolonged the war for another six months. Was Paris worth this price? Smith answers this question in a “brisk new recounting” that is “terse, authoritative, [and] unsentimental” (The Washington Post).

Praise For The Liberation of Paris: How Eisenhower, de Gaulle, and von Choltitz Saved the City of Light…

“I read Jean Edward Smith’s The Liberation of Paris with tears in my eyes and huge admiration. It is still one of the most moving moments in the history of the Second World War—I remember my mother opening a bottle of champagne and singing ‘La Marseillaise’ when we heard the news—and Jean portrays not only the drama and suspense of the event, but the character of the people who were involved, in a very objective way, giving full weight to the profound importance of General de Gaulle, and to the crucial role of General Eisenhower, for which he has never received sufficient credit. This is great history.”
— Michael Korda, author of Ike: An American Hero

“The liberation represented not just the end of the city’s darkest hour, with rapturous pent-up joy in the streets, but the very birth of modern France. . . . And it thrust Dwight D. Eisenhower, not for the last time, into the role of diplomat and political crisis manager. . . . Smith’s brisk new recounting [is] terse, authoritative, unsentimental.”
— Charles Trueheart

“To mark its 75th anniversary, Jean Edward Smith has written an epic story of the Allied liberation of Paris in August 1944. Filled with some of the most dramatic scenes of World War II, Smith’s compelling account of how the great City of Light was saved from destruction is history at its finest.”
— Carlo D’Este, author of Decision in Normandy and Patton: A Genius for War

“Jean Edward Smith is a marvelous historian, and in his latest work he does not disappoint. The Liberation of Paris is a scintillating and fascinating book. How was one of the great cities of the world saved? It's a rousing tale. Bravo!”
— Jay Winik, author of 1944 and April 1865

“One of the most dramatic events of World War II was the liberation of Paris by French and American troops in August 1944.  Behind the drama was a complex tangle of military and political considerations that Jean Edward Smith disentangles with extraordinary clarity in this vivid narrative that highlights the actions of de Gaulle, Eisenhower, and especially General Dietrich von Choltitz, commander of German occupation forces, who defied Hitler's orders to destroy Paris before surrendering.”
— James McPherson, author of Battle Cry of Freedom

"The Liberation of Paris in August 1944 has to be one of history’s happiest moments. . . . It is still a great story in Jean Edward Smith’s trim but engaging account of driving darkness from the City of Light."
— Evan Thomas

“Eminent historian Smith has such a breadth of knowledge of this era in history that he is able to offer a distillation of swift-moving events surrounding the 1944 liberation of Paris in a marvelously readable fashion. . . . A succinctly instructive historical narrative by a top-notch historian and author.”
— Kirkus Reviews

“The Liberation of Paris is a remarkable story that shows how three men from warring sides of an epic struggle saved Paris. Smith’s book is a must-read that brims with heroism, intrigue, chaos and danger.”
— Susan Eisenhower

"A fascinating chapter in the larger of story of the Allied victory in Europe."
— Booklist

“An outstanding concise history of one of the most dramatic moments of WWII: the liberation of the City of Light in August 1944. . . . Smith is an outstanding historian and tells a dramatic story well. This is a solid contribution to the history of WWII.”
— Publishers Weekly

"Smith dramatically presents a historical biography of a defining moment in time. . . . A fitting celebration and remembrance marking the 75th anniversary of the liberation of France and Paris."
— Library Journal

"Authoritative and beautifully written. . . . This expertly crafted narrative is a gem."
— Roger Bishop

Jean Edward Smith taught at the University of Toronto for thirty-five years, and at Marshall University for twelve. He was also a visiting scholar at Columbia, Princeton, and Georgetown. He is the author of Bush, a biography of the 43rd president; Eisenhower in War and Peace; FDR, winner of the 2008 Francis Parkman Prize of the Society of American Historians; Grant, a 2002 Pulitzer Prize finalist; and John Marshall: Definer of a Nation.
Loading...
or
Not Currently Available for Direct Purchase