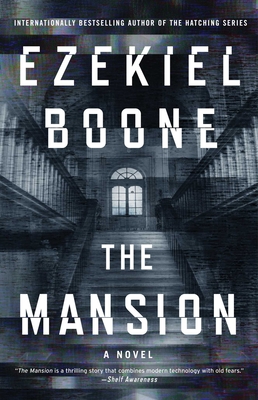 In this “classic haunted house tale meets Black Mirror” (Book Riot), a family moves into a home equipped with the world’s most intelligent, cutting-edge, and intuitive computer ever—but a buried secret leads to terrifying and catastrophic consequences.

After two years of living on cheap beer and little else in a bitterly cold tiny cabin outside an abandoned, crumbling mansion, young programmers Shawn Eagle and Billy Stafford have created something that could make them rich: a revolutionary computer they name Eagle Logic.

But the hard work and escalating tension have not been kind to their once solid friendship—Shawn’s girlfriend Emily has left him for Billy, and a third partner has disappeared under mysterious circumstances. While Billy walks away with Emily, Shawn takes Eagle Logic, which he uses to build a multi-billion-dollar company that eventually outshines Apple, Google, and Microsoft combined.

Years later, Billy is a failure, beset by poverty and addiction, and Shawn is the most famous man in the world. Unable to let the past be forgotten, Shawn decides to resurrect his and Billy’s biggest failure: a next-generation computer program named Nellie that can control a house’s every function. He decides to set it up in the abandoned mansion they worked near all those years ago. But something about Nellie isn’t right—and the reconstruction of the mansion is plagued by accidental deaths. Shawn is forced to bring Billy back, despite their longstanding mutual hatred, to discover and destroy the evil that lurks in the source code.

From the internationally bestselling author of the “apocalyptic extravaganza” (Publishers Weekly) The Hatching series, this white-knuckled thriller is perfect for fans of Stephen King and Iain Reid.

Praise For The Mansion: A Novel…

"A richly composed, very scary thriller that would be welcome squeezed between Neal Stephenson and Chuck Wendig on your bookshelf. A ghost story that could be described as the Overlook Hotel with Alexa onboard but is, thankfully, frightening in its own right."
— Kirkus Reviews

"Ezekiel Boone, author of such creepy-crawly masterpieces as The Hatching and Skitter, returns with a new tale of horror and thrills."
— CrimeReads

"Ezekiel Boone’s latest offering reads like a cross between Stephen King’s The Shining and one of John Connolly’s more recent Charlie Parker books...THE MANSION is eerie, thrilling, and impossible to put down."
— The Real Book Spy

"Boone’s (Zero Day) latest is like if The Shining were written in the time of Amazon Alexa."
— PureWow

"The Mansion is a wonderful update of a classic model: people with secrets stuck in an old house with its own checkered past. Luckily, Boone knows the tropes of that old story well, and works to subvert them every chance he gets . . . The Mansion is a thrilling story that combines modern technology with old fears."
— Shelf Awareness