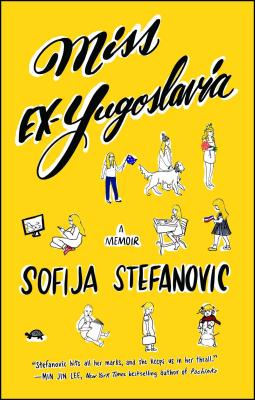 A “funny and tragic and beautiful in all the right places” (Jenny Lawson, #1 New York Times bestseller author of Furiously Happy) memoir about the immigrant experience and life as a perpetual fish-out-of-water, from the acclaimed Serbian-Australian storyteller.

Sofija Stefanovic makes the first of many awkward entrances in 1982, when she is born in socialist Yugoslavia. The circumstances of her birth (a blackout, gasoline shortages, bickering parents) don’t exactly get her off to a running start. While around her, ethnic tensions are stoked by totalitarian leaders with violent agendas, Stefanovic’s early life is filled with Yugo rock, inadvisable crushes, and the quirky ups and downs of life in a socialist state.

As the political situation grows more dire, the Stefanovics travel back and forth between faraway, peaceful Australia, where they can’t seem to fit in, and their turbulent homeland, which they can’t seem to shake. Meanwhile, Yugoslavia collapses into the bloodiest European conflict in recent history.

Featuring warlords and beauty queens, tiger cubs and Baby-Sitters Clubs, Sofija Stefanovic’s memoir is a window to a complicated culture that she both cherishes and resents. Revealing war and immigration from the crucial viewpoint of women and children, Stefanovic chronicles her own coming-of-age, both as a woman and as an artist. Refreshingly candid, poignant, and illuminating, “Stefanovic’s story is as unique and wacky as it is important” (Esquire).

Sofija Stefanovic is a Serbian-Australian writer and storyteller based in Manhattan. She hosts the popular literary salon, Women of Letters New York, and This Alien Nation—a monthly celebration of immigration. She’s a regular storyteller with The Moth. Her writing has appeared in The New York Times, Guardian.com, and Elle.com, among others. Learn more at SofijaStefanovic.com.

Praise For Miss Ex-Yugoslavia: A Memoir…

"This stand-out memoir chronicles Stefanovic’s life from her childhood to early twenties, coming back and forth between Yugoslavia and Australia during the Yugoslav wars...Stefanovic’s story is as unique and wacky as it is important." —Esquire

“A poignant, charming, and gorgeously written account of the complexities of navigating the immigrant experience and finding a home — especially when the place you used to call home no longer exists as it once did… Fresh, vibrant, and enlightening, Miss Ex-Yugoslavia is a stunning immigrant narrative that will tug at your heartstrings the whole way through." —Bustle

"Sofija Stefanovic’s beautiful memoir Miss Ex-Yugoslavia depicts the elegant transit of a girl becoming an artist. This is a story we yearn to know: How does a girl lose her childhood, family, and nation, yet nurture her memories, dreams, and art? Stefanovic hits all her marks, and she keeps us in her thrall.”

“Funny and tragic and beautiful in all the right places. I loved it.”

“[A] brilliant debut memoir… Tongue planted firmly in cheek, Stefanovic’s memoir is equal parts raucous coming-of-age story, heartbreaking family drama, and quest for identity — topped with generous handfuls of political and historical introspection...Stefanovic is such a gifted, natural storyteller that all these elements blend together seamlessly, sometimes in the same paragraph, resulting in an authentic glimpse into a life filled with love and fear; hope and despair. It’s a marvel… Filled with Yugo-rock and news reports, Baby Sitters Club books and revolution, Miss Ex-Yugoslavia is a remarkable work from an exceptional storyteller." —The Cedar Rapids Gazette
or support indie stores by buying on
Copyright © 2020 American Booksellers Association