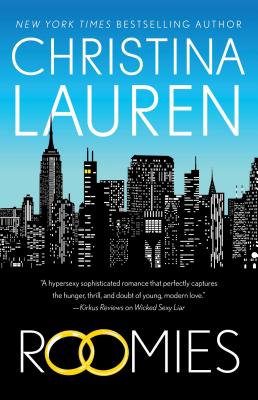 From subway to Broadway to happily ever after. Modern love in all its thrill, hilarity, and uncertainty has never been so compulsively readable as in New York Times bestselling author Christina Lauren’s Roomies.

Marriages of convenience are so...inconvenient.

For months Holland Bakker has invented excuses to descend into the subway station near her apartment, drawn to the captivating music performed by her street musician crush. Lacking the nerve to actually talk to the gorgeous stranger, fate steps in one night in the form of a drunken attacker. Calvin Mcloughlin rescues her, but quickly disappears when the police start asking questions.

Using the only resource she has to pay the brilliant musician back, Holland gets Calvin an audition with her uncle, Broadway’s hottest musical director. When the tryout goes better than even Holland could have imagined, Calvin is set for a great entry into Broadway—until his reason for disappearing earlier becomes clear: he’s in the country illegally, his student visa having expired years ago.

Seeing that her uncle needs Calvin as much as Calvin needs him, a wild idea takes hold of her. Impulsively, she marries the Irishman, her infatuation a secret only to him. As their relationship evolves and Calvin becomes the darling of Broadway—in the middle of the theatrics and the acting-not-acting—will Holland and Calvin to realize that they both stopped pretending a long time ago?

"This book has everything that makes romance novels great: a heroine's journey to self-discovery, a leading man worthy of a woman's love, and plenty of misty tears and full-on belly laughs along the way. Another knockout by Lauren."
— Kirkus Reviews

“For decades, the tale of a marriage of convenience that becomes something more has inspired countless romances. With Roomies, Christina Lauren put a fresh, modern spin on the trope with their completely un-put-down-able green card romp…. Lauren masters rom-com banter and plotting, while also reminding us that the best entries in the genre are all about recognizing our own value regardless of relationship status. One of our 10 best romances of 2017. A+.”
— Entertainment Weekly

“Lauren brings her characteristic charm to the story. Holland’s tale is more than an unrequited crush; it’s about self-expectations, problematic friendships, unconventional family, and the strange power of love.”
— Booklist

"Smart, sexy, and satisfying . . . destined to become a romance classic."
— Tara Sue Me on Beautiful Bastard

“Funny, feminist, and a great example of a modern romance . . . Evie is amazing and will go down in history as one of the best heroines I’ve read.”
— Smart Bitches, Trashy Books on Dating You / Hating You

“Smart and sexy . . . Lola can’t believe that someone as wonderful as Oliver (he is rather wonderful) would ever love her, and Lauren captures her insecurities in a powerful way that will hit close to home for many.”
— The Washington Post on Dark Wild Night

“A sexy, sweet treasure of a story. I loved every word.”
— Sylvia Day on Sweet Filthy Boy

“Christina Lauren is back in top form in this light, funny, and unflinchingly honest stand-alone novel about growing up, standing up, and falling in love.”
— RT Book Reviews (top pick) on Dating You / Hating You

Christina Lauren is the combined pen name of longtime writing partners and best friends Christina Hobbs and Lauren Billings, the New York Times, USA TODAY, and #1 internationally bestselling authors of the Beautiful and Wild Seasons series, Dating You / Hating You, Autoboyography, Love and Other Words, Roomies, Josh and Hazel’s Guide to Not Dating, My Favorite Half-Night Stand, The Unhoneymooners, Twice in a Blue Moon, and The Soulmate Equation. You can find them online at ChristinaLaurenBooks.com, @ChristinaLauren on Instagram, or @ChristinaLauren on Twitter.
Loading...
or support indie stores by buying on