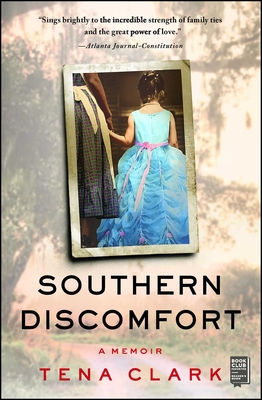 “Southern Discomfort is a raw, thought-provoking examination of privilege, racism, sexism, the masks we wear to conform to society’s expectations, and the journey toward authentic identity.” —Read with Us: Caste, An Oprah’s Book Club Discussion Guide

For fans of beloved memoirs like Educated and The Glass Castle, a “raw and deeply honest” (Publishers Weekly, starred review) true story set in rural Mississippi during the Civil Rights era about a white girl coming of age in a repressive society and the woman who gave her the strength to forge her own path—the black nanny who cared for her.

In her memoir that is a “story of love and fury” (Jackson Clarion-Ledger), Grammy Award-winning songwriter and producer Tena Clark recounts her chaotic childhood in a time fraught with racial and social tension. Tena was born in 1953 in a tiny Mississippi town close to the Alabama border, where the legacy of slavery and racial injustice still permeated every aspect of life. On the outside, Tena’s childhood looked like a fairytale. Her father was one of the richest men in the state; her mother was a regal beauty. The family lived on a sprawling farm and had the only swimming pool in town; Tena was given her first car—a royal blue Camaro—at twelve.

But behind closed doors, Tena’s family life was deeply lonely and dysfunctional. By the time she was three, her parents’ marriage had dissolved into a swamp of alcohol, rampant infidelity, and guns. Adding to the turmoil, Tena understood from a very young age that she was different from her three older sisters, all of whom had been beauty queens and majorettes. Tena knew she didn’t want to be a majorette—she wanted to marry one.

On Tena’s tenth birthday, her mother, emboldened by alcoholism and enraged by her husband’s incessant cheating, walked out for good, instantly becoming an outcast in their society. Tena was left in the care of her nanny, Virgie, even though she was raising nine of her own children and was not allowed to eat from the family’s plates or use their bathroom. It was Virgie’s acceptance and unconditional love that gave Tena the courage to stand up to her domineering father, the faith to believe in her mother’s love, and the strength to be her true self.

Combining the spirit of brave coming-of-age memoirs such as The Glass Castle and vivid, evocative Southern fiction like To Kill a Mockingbird, Southern Discomfort is “an unforgettable southern story… [that] sings brightly to the incredible strength of family ties and the great power of love” (The Atlanta Journal-Constitution) and is destined to become a new classic.

Praise For Southern Discomfort: A Memoir…

"Powerful, upsetting, and deeply hopeful, Tena Clark’s SOUTHERN DISCOMFORT is the brutal and true story of a family coming apart in a fracturing South told from the point of a view of a girl  who makes peace with what she survived, fled and eventually came home to. A brave, wildly engrossing memoir."
— Bill Clegg, author of Did You Ever Have a Family

"Here is a slice of the late-twentieth century South that goes all the way to the bone, and that hurts a bit! – but it feels like it just got to be done.  Southern Discomfort is a dysfunctional family romance with all the trimmings, and it will also tell you a thing or two about that time and that place that you didn’t already know."
— Madison Smartt Bell

"Raw and deeply honest....What Clark shows so beautifully is that the people she discusses, as unredeemable as they may at first seem, are much more complex....Clark’s narrative draws the reader in to a wonderful story of the South going from old to new."
— Publishers Weekly, starred review

“The Mississippi blues take on new meaning in this tragic yet uplifting memoir. With its Southern setting and themes of racial conflict and civil rights, it's easy to see how this book has been compared to The Help. But Clark's debut is an entirely original—and true—story… the overarching theme is love. A highly satisfying look at a flawed family, a conflicted South, and a fraught future.”
— Kirkus Reviews

"Tena Clark weaves her deeply personal, private struggles together with the painful, shameful struggles she witnessed in Mississippi during the Civil Rights era in her beautiful, bravely shared memoir."

“Tena Clark is a pioneering force of nature, and her story is as powerful, riveting, and inspiring as she is. Do yourself a favor. Get comfortable and start reading.”
— Maria Shriver

"Tena Clark's  memoir SOUTHERN DISCOMFORT, a true coming of age story, reads like a Tennessee Williams play. Set in the deep south where Magnolias, catfish, the Bible, guns, alcohol, racism and carnal knowledge collide, Tena's story confronts the heartbeat of America's identity crisis. A crisis of faith, family, freedom and truth. This story will make you laugh out loud, cry, and hope that one day you can stand as tall as Tena."
— Debbie Allen

"Tena Clark’s astounding memoir engaged me so deeply that I felt the pain of a lonely child in a chaotic home, and, happily at the end, the exhilaration of her hard won freedom. A wonderful read."
— Norman Lear

"Tena Clark's riveting memoir shows us that even in the midst of fear, anger, and hate...tolerance, forgiveness, and love will rise. A triumphant journey and an inspiring read!"
— Sela Ward

“Clark tells this story of love and fury with humor and no self-pity. There are tales so wild, if they were in a novel, they would strain belief. But Southern Discomfort has an almost rollicking tone. No matter how hair-raising the event, I never really feared for the author, never doubted that wit and gumption would get her out.”
— Jackson Clarion-Ledger

"A literary memoir, one that soars with the artistic flare of William Faulkner and Tennessee Williams on the complexities of the Southern family."

Tena Clark is a Grammy Award-winning songwriter, music producer, and activist. She lives in Atlanta. Southern Discomfort is her first book.
Loading...
or support indie stores by buying on