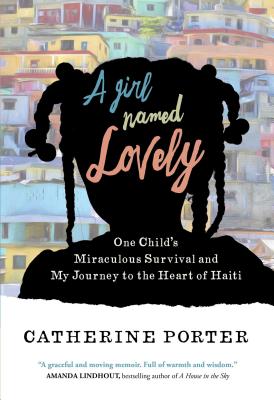 An insightful and uplifting memoir about a young Haitian girl in post-earthquake Haiti, and the profound, life-changing effect she had on one journalist's life.

In January 2010, a devastating earthquake struck Haiti, killing hundreds of thousands of people and paralyzing the country. Catherine Porter, a newly minted international reporter, was on the ground in the immediate aftermath. Moments after she arrived in Haiti, Catherine found her first story. A ragtag group of volunteers told her about a “miracle child”—a two-year-old girl who had survived six days under the rubble and emerged virtually unscathed.

Catherine found the girl the next day. Her family was a mystery; her future uncertain. Her name was Lovely. She seemed a symbol of Haiti—both hopeful and despairing.

When Catherine learned that Lovely had been reunited with her family, she did what any journalist would do and followed the story. The cardinal rule of journalism is to remain objective and not become personally involved in the stories you report. But Catherine broke that rule on the last day of her second trip to Haiti. That day, Catherine made the simple decision to enroll Lovely in school, and to pay for it with money she and her readers donated.

Over the next five years, Catherine would visit Lovely and her family seventeen times, while also reporting on the country’s struggles to harness the international rush of aid. Each trip, Catherine's relationship with Lovely and her family became more involved and more complicated. Trying to balance her instincts as a mother and a journalist, and increasingly conscious of the costs involved, Catherine found herself struggling to align her worldview with the realities of Haiti after the earthquake. Although her dual roles as donor and journalist were constantly at odds, as one piled up expectations and the other documented failures, a third role had emerged and quietly become the most important: that of a friend.

A Girl Named Lovely is about the reverberations of a single decision—in Lovely’s life and in Catherine’s. It recounts a journalist’s voyage into the poorest country in the Western hemisphere, hit by the greatest natural disaster in modern history, and the fraught, messy realities of international aid. It is about hope, kindness, heartbreak, and the modest but meaningful difference one person can make.

Praise For A Girl Named Lovely: One Child's Miraculous Survival and My Journey to the Heart of Haiti…

“A Girl Named Lovely is a graceful and moving memoir. Full of warmth and wisdom, it opens your eyes and your heart to those in need, invites you to step into their world, and, finally, inspires you to find a way to help.”
— Amanda Lindhout, bestselling author of A House in the Sky

“This is a beautiful and tenderly told story, at times shocking, always illuminating. Catherine takes us into the heart of Haiti but also into her own conflicted heart, where her professionalism collides with her humanity. Ultimately, it’s a little Haitian girl who shows Catherine how she can be—at once—a compassionate person, a rigorous journalist, and a loving mother. A Girl Named Lovely is a book that will resonate with readers long after the final poignant pages.”
— Carol Off, bestselling author of All We Left Behind

“As any good journalist knows—and Porter is as dedicated and enterprising as they come—there is the story you set out to write and the one you find on the ground when objectivity confronts reality. . . . In this absorbing account, Porter opens her heart as well as her notebook to walk the fine line between her job as a reporter and her soul as a compassionate human being.  The result is a clear-eyed, unflinching narrative that will move even the flintiest and jaundiced of readers.”
— Sandra Martin, award-winning journalist & author of A Good Death

“We often do not appreciate how precious life is until we witness with our own eyes real human suffering. A Girl Named Lovely shows that each and every one of us has the power to help, and that sometimes, the simplest acts can plant the seeds for a new life for a person in need. This book needs to be heard. Read it, appreciate it, and let it inspire you to help.”
— Tima Kurdi, bestselling author of The Boy on the Beach

“Porter sums up Haiti in all its charm and complexity. An intimate and cautionary tale about the ethics of charity and development, A Girl Named Lovely is also an important story about love across cultural lines and what commitment to others really means.”
— Amy Wilentz, award-winning author of Farewell, Fred Voodoo

“A Girl Named Lovely is a must read. Catherine Porter provides us with understanding and hope about Haiti, free of platitudes and bromides. It’s a story of compassion and resilience.”
— Bob Rae, bestselling author of What's Happened to Politics?

"Powerful and searching, Porter’s book offers an unforgettable account of how one woman’s humanitarian gestures not only changed her, but also made a difference in the lives of people living in unimaginable misery. A movingly candid memoir about finding some measure of hope in 'the poorest country in the western hemisphere.'"
— Kirkus Reviews

“A Girl Named Lovely is more than a good story. It’s also a fascinating exploration of the complexities of giving. . . . Amid the messy complications, corruption and devastation, Lovely stands as a small, poignant symbol of hope, and this book as an eloquent testament to humanity’s imperfect optimism. Highly readable and heart-wrenchingly affecting.”
— Toronto Star

"Porter has a gift for letting the people she meets tell their own stories in their own words, moving us to feel real joy and real dismay with Lovely’s family, and awe at the simple caring so evident in so many."
— Winnipeg Free Press

Catherine Porter is the Canada bureau chief for The New York Times, based in Toronto. She joined the paper in February 2017 from Toronto Star, Canada’s largest-circulation newspaper, where she was a columnist and feature writer. Catherine has received two National Newspaper Awards in Canada, the Landsberg Award for her feminist columns, and a Queen’s Jubliee Medal for grassroots community work. She lives in Toronto with her husband and two kids. Visit her at PorterWrites.ca or on Twitter @PortertheReport.
Loading...
or
Not Currently Available for Direct Purchase