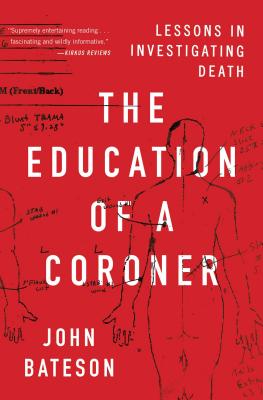 The Education of a Coroner

An “entertaining” (Booklist) account of the mysterious, hair-raising, and heartbreaking cases handled by the coroner of Marin County, California throughout his four decades on the job—from high-profile deaths and serial killers to inmate murders and Golden Gate Bridge suicides.

Marin County, California is a study in contradictions. Its natural beauty attracts celebrity residents and thousands of visitors every year, yet the county also is home to San Quentin Prison, one of the oldest and largest penitentiaries in the United States. Marin ranks in the top one percent of counties nationwide in terms of affluence and overall health, yet it is far above the norm in drug overdoses and alcoholism, not to mention the large percentage of suicides that occur on the Golden Gate Bridge.

Ken Holmes worked in the Marin County Coroner’s Office for thirty-six years, starting as a death investigator and ending as the three-term, elected coroner. As he grew into the job—one that is far different from the forensics we see on television—Holmes learned a variety of skills, from finding hidden clues at death scenes, interviewing witnesses effectively, managing bystanders and reporters, and preparing testimony for court to how to notify families of a death with sensitivity and compassion. He also learned about different kinds of firearms, all types of drugs—prescription and illegal—and about certain unexpected and potentially fatal phenomena, such as autoeroticism.

Complete with poignant anecdotes, The Education of a Coroner is “riveting and complex…supremely entertaining reading material and…a fascinating and wildly informative dive into the mysterious world of death and decay” (Kirkus Reviews).

Praise For The Education of a Coroner: Lessons in Investigating Death…

“Riveting and complex… the cases [Bateson] meticulously describes vividly represent Holmes' long-standing tenure as a forensic professional…Throughout the book, the author spotlights each gory detail with macabre precision…These factual narratives magnify the work and the resolve necessary to bring closure to violent, unjust, suspicious, or unresolved deaths. They also make for supremely entertaining reading material for anyone with a dark curiosity in forensic science. A fascinating and wildly informative dive into the mysterious world of death and decay.” —Kirkus Reviews

“Entertaining, if morbid, reading, especially for those with an interest in forensics and homicide investigations.” —Booklist

“Bateson is a masterful storyteller, making for captivating reading…. Highly recommended for those interested in forensics or memoirs.” —Seattle Book Review

John Bateson was executive director of a nationally certified crisis intervention and suicide prevention center in the San Francisco Bay Area for sixteen years. He is the author of three previous books—The Last and Greatest Battle, The Final Leap, and Building Hope.
Loading...
or support indie stores by buying on