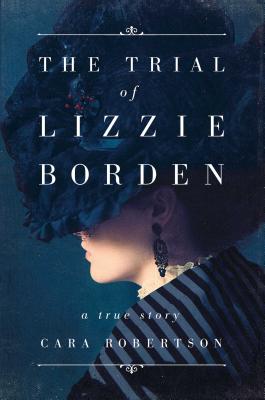 The Trial of Lizzie Borden

“Cara Robertson’s first book details the events surrounding the infamous murders of Andrew and Abby Borden in Fall River, Massachusetts, in 1892. Based entirely on primary sources—trial transcripts, contemporary accounts, and even recently discovered letters from Lizzie herself—The Trial of Lizzie Borden is an in-depth look at the circumstances surrounding the incident and her subsequent trial. Robertson has poured decades of research into this sensational book, breathing new life into a story that has captivated the American psyche for over a century. An excellent read for fans of David Grann’s Killers of the Flower Moon and Michelle McNamara’s I’ll Be Gone in the Dark.”
— Rachel Haisley, The King's English Bookshop, Salt Lake City, UT
View the List

In Cara Robertson’s “enthralling new book,” The Trial of Lizzie Borden, “the reader is to serve as judge and jury” (The New York Times). Based on twenty years of research and recently unearthed evidence, this true crime and legal history is the “definitive account to date of one of America’s most notorious and enduring murder mysteries” (Publishers Weekly, starred review).

When Andrew and Abby Borden were brutally hacked to death in Fall River, Massachusetts, in August 1892, the arrest of the couple’s younger daughter Lizzie turned the case into international news and her murder trial into a spectacle unparalleled in American history. Reporters flocked to the scene. Well-known columnists took up conspicuous seats in the courtroom. The defendant was relentlessly scrutinized for signs of guilt or innocence. Everyone—rich and poor, suffragists and social conservatives, legal scholars, and laypeople—had an opinion about Lizzie Borden’s guilt or innocence. Was she a cold-blooded murderess or an unjustly persecuted lady? Did she or didn’t she?

An essential piece of American mythology, the popular fascination with the Borden murders has endured for more than one hundred years. Told and retold in every conceivable genre, the murders have secured a place in the American pantheon of mythic horror. In contrast, “Cara Robertson presents the story with the thoroughness one expects from an attorney…Fans of crime novels will love it” (Kirkus Reviews). Based on transcripts of the Borden legal proceedings, contemporary newspaper accounts, unpublished local accounts, and recently unearthed letters from Lizzie herself, The Trial of Lizzie Borden is “a fast-paced, page-turning read” (Booklist, starred review) that offers a window into America in the Gilded Age. This “remarkable” (Bustle) book “should be at the top of your reading list” (PopSugar).

Praise For The Trial of Lizzie Borden…

“Enthralling…[Robertson] reopens the case and presents the evidence afresh, all those alluring details out of an Agatha Christie novel (the mystery of Lizzie’s burned dress, the curious disappearance of a hatchet handle). The reader is to serve as judge and jury.” —Parul Sehgal, The New York Times

"With deft storytelling and convincing scholarship, Cara Robertson does the seemingly impossible by bringing new life to perhaps our oldest true-crime saga: the Gilded Age case of Lizzie Borden. By giving us Fall River, Massachusetts, in full and in context, as well as the panoply of characters who made the trial so sensational, Robertson has written that rarest of things: a page-turner with a point." —Jon Meacham, author of The Soul of America

“A fascinating social history.” —Mary Higgins Clark, bestselling author of I’ve Got My Eyes on You

“The Trial of Lizzie Borden is a taut, understated masterpiece: the rare history book that makes the hair on the back of your neck stand up. Cara Robertson scours the Trial of the (Nineteenth) Century with the perseverance of a scholar, the gimlet eye of a detective, and the elegance of a novelist. As she depicts the Borden murders and the young lady accused of committing them, Robertson reveals the seething class, ethnic, and gendered tensions that roiled the glittering surface of the Gilded Age.” —Jane Kamensky, author of A Revolution in Color and the Jonathan Trumball Professor of American History at Harvard University

"Robertson presents the story with the thoroughness one expects from an attorney...Fans of crime novels will love it." —Kirkus Review

"You won’t be disappointed." —Hello Giggles

"A fascinating and definitive account of the notorious trial of Lizzie Borden, the woman accused of the brutal murder of her father and her stepmother. Beautifully written and rich in detail, The Trial of Lizzie Borden sheds new light not only on the trial itself, but also on the setting, the period, and, in a sense, on the American soul at the end of the nineteenth century. —Lawrence M. Friedman, Marion Rice Kirkwood Professor of Law, Stanford University

Cara Robertson began researching the Borden case as a Harvard undergraduate in 1990. She holds a PhD from University of Oxford and a JD from Stanford Law School. She clerked at the Supreme Court of the United States, served as a legal adviser to the International Criminal Tribunal for the former Yugoslavia at The Hague, and has written for various publications. Her scholarship has been supported by the National Endowment for the Humanities and the National Humanities Center, of which she is a Trustee. The Trial of Lizzie Borden, her first book, won the New England Society Book Award in 2020.
Loading...
or
Not Currently Available for Direct Purchase