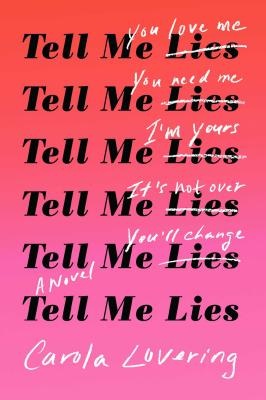 “Think: The Affair meets Animal House meets your beach bag. Get into it.”—TheSkimm

“Everything you could ever want in a summer read.” —USA TODAY

Lucy Albright is far from her Long Island upbringing when she arrives on the campus of her small California college, and happy to be hundreds of miles from her mother, whom she’s never forgiven for an act of betrayal in her early teen years. Quickly grasping at her fresh start, Lucy embraces college life and all it has to offer—new friends, wild parties, stimulating classes. And then she meets Stephen DeMarco. Charming. Attractive. Complicated. Devastating.

Confident and cocksure, Stephen sees something in Lucy that no one else has, and she’s quickly seduced by this vision of herself, and the sense of possibility that his attention brings her. Meanwhile, Stephen is determined to forget an incident buried in his past that, if exposed, could ruin him, and his single-minded drive for success extends to winning, and keeping, Lucy’s heart.

Lucy knows there’s something about Stephen that isn’t to be trusted. Stephen knows Lucy can’t tear herself away. And their addicting entanglement will have consequences they never could have imagined.

Alternating between Lucy’s and Stephen’s voices, Tell Me Lies follows their connection through college and post-college life in New York City. With psychological insight and biting wit, this keenly intelligent and staggeringly resonant novel chronicles the yearning ambitions, desires, and dilemmas of young adulthood, and the difficulty of letting go, even when you know you should.

Praise For Tell Me Lies: A Novel…

“Think: The Affair meets Animal House meets your beach bag. Get into it.”
— TheSkimm

“Tell Me Lies is a page-turner. I devoured it in 48 hours.”
— Jessica Knoll, New York Times bestselling author of Luckiest Girl Alive and The Favorite Sister

“Everything you could ever want in a summer read.”
— USA Today

“A sizzling summer read, Tell Me Lies is an absorbing novel with plenty of twists and surprises along the way, including a satisfying reveal near the end. But it's also a fascinating examination of toxic relationships, dysfunctional relationships, and the bad habit we have all been guilty of having: confusing lust with love, drama with maturity, and Mr. Wrong for Mr. Right. Only maybe now, after seeing Lucy and Stephen's trainwreck unfold, we'll all be able to recognize the signs in our own lives a lot sooner.”
— Bustle

“If you were pulled in by Joe's passion in You, you'll fall for Stephen and his unique charm in Tell Me Lies.”
— PopSugar

“This story of addictive love is the perfect companion for a day at the beach.”
— Working Mother

“A dark, exhilarating coming-of-age story...there might be no better addition to your beach bag.”
— Town and Country, Best Books to Read This June

“A coming-of-age story that explores the consequences and tribulations of still being haunted by the wrong one who you just can’t let go of, the book is narrated by both Lucy and her love interest, Stephen. Watch as their relationship grows and changes throughout college and after-grad life in NYC, within the push and pull of not-right young romance, and not quite being able to let go.”
— Brides

”Tell Me Lies is probably the most relatable novel out there right now, so much so that this is the second time we’ve written about it. It’s about an on-again off-again relationship with the one dude whose “U up?” texts you will always respond to until the end of time. Instagramming this is kind of the summer 2018 version of posting photos of “Milk and Honey.” It lets everyone know that something fucked you up emotionally, but that you’re too smart to just tweet Drake lyrics about it.”
— Betches

“As the years pass and shocking twists reveal themselves, the more hooked you’ll be. Tell Me Lies is the perfect thrilling summer read."
— Hello Giggles

"Lovering’s debut is like a chemical reaction, exploding with sex, drugs, and all things that make a relationship toxic. Told by alternating point-of-view between Lucy and Stephen, this coming-of-age story will strike a chord with readers. From the emotionally raw, vulnerable, yet addicting lure that Lucy experiences with Stephen to his lack of guilt over his misdeeds, readers will be enraptured by this story that explores the darkest sides of a relationship gone wrong."
— Booklist

“A very strong debut; Lovering has not just done great things with her character development, she also has nailed a strong sense of pacing. Lucy has a secret that she only tells Stephen, and Stephen is harboring a secret that could destroy him—one that Lucy will unravel. I already am looking forward to seeing what Lovering writes next.”
— BookReporter

"Fans of Colleen Hoover will devour Lovering's debut that is full of toxic love, secrets, and intense romance."
— Library Journal

“If you are searching for a toxic love story (and sometimes you just need one), this is it.”
— Levo League

“A dazzling new New York voice…[and] a dangerously delicious cocktail of twisted love and infatuation, Tell Me Lies is the perfect cautionary drama to indulge in.”
— The Modern Jetsetter

"Ever wondered what that bad boyfriend was really thinking? You’ll find out in Carola Lovering’s addictive debut. For fans of Jessica Knoll and Caroline Kepnes, Tell Me Lies is a devastatingly accurate portrayal of a toxic relationship. Once its hooks are in, you'll have no choice but to tear through every page."
— Georgia Clark, author of The Regulars

"Tell Me Lies is as dark and daring as it is absorbing. I found myself immediately drawn into the desperation and misguided obsession of young love. Who hasn't, at one point, fallen this hard and gotten this lost?  Carola Lovering has created something unexpected and original, yet deeply familiar."
— Taylor Jenkins Reid, author of The Seven Husbands of Evelyn Hugo

"Riveting. With Tell Me Lies, Carola Lovering has given us a keenly observed, no-holds-barred examination of the mistakes we make under the guise of love. If you've ever fallen for the wrong person—and let's be honest, you probably have—this book is for you."
— Grant Ginder, author of The People We Hate at the Wedding

"Tell Me Lies is a daring coming of age tale from a fresh new voice. This unvarnished look at both sides of a toxic romance is as resonant as it is harrowing, with characters so finely drawn they’ll linger in the imaginations of readers long after the final page. This book is unflinching, unforgettable, and unputdownable.”
— Andrea Dunlop, author of She Regrets Nothing

“Reading Tell Me Lies is a visceral and, at times, unbearably relatable experience that I was utterly unprepared for. Carola Lovering creates a story so deftly handled and characters so believably flawed that you can’t help but become fully immersed. This debut left me gutted and raw in the best kind of way.”
— Corinne Sullivan, author of Indecent

Carola Lovering attended Colorado College, and her work has appeared in W Magazine, National Geographic, Outside, and Yoga Journal, among other publications. Tell Me Lies is her first novel. She currently lives in Brooklyn.
Loading...
or
Not Currently Available for Direct Purchase