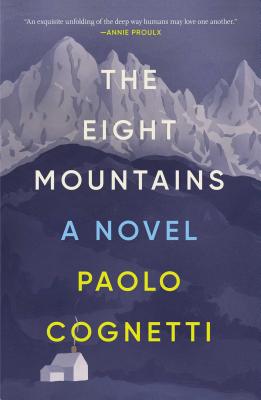 “A fine book, a rich, achingly painful story that is made for all of us who have ever felt a hunger for the mountains. Few books have so accurately described the way stony heights can define one's sense of joy and rightness. And it is an exquisite unfolding of the deep way humans may love one another.” —Annie Proulx

For fans of Elena Ferrante and Paulo Coelho comes the international sensation about the friendship between two young Italian boys from different backgrounds and how their connection evolves and challenges them throughout their lives.

Pietro is a lonely boy living in Milan. With his parents becoming more distant each day, the only thing the family shares is their love for the mountains that surround Italy.

While on vacation at the foot of the Aosta Valley, Pietro meets Bruno, an adventurous, spirited local boy. Together they spend many summers exploring the mountains’ meadows and peaks and discover the similarities and differences in their lives, their backgrounds, and their futures. The two boys come to find the true meaning of friendship and camaraderie, even as their divergent paths in life—Bruno’s in the mountains, Pietro’s across the world—test the strength and meaning of their connection.

A modern Italian masterpiece, The Eight Mountains is a lyrical coming-of-age story about the power of male friendships and the enduring bond between fathers and sons. “There are no more universal themes than those of the landscape, friendship, and becoming adults, and Cognetti’s writing becomes classical (and elegant) to best tell this story…a true novel by a great writer" (Rolling Stone Italia).

Praise For The Eight Mountains: A Novel…

“A fine book, a rich, achingly painful story that is made for all of us who have ever felt a hunger for the mountains. Few books have so accurately described the way stony heights can define one's sense of joy and rightness. And it is an exquisite unfolding of the deep way humans may love one another.”–Annie Proulx

"Could Cognetti be the new Elena Ferrante?"–The Bookseller

“A novel that deals with deep themes – friendship, the relationship between generations, the management of one's life – in simple and precise yet evocative language.”–Corriere della Sera

“Through essential yet extraordinarily evocative and intense language, Cognetti constructs a short novel that many have already called a classic, in which undoubtedly echo the masters who inspired it.” –Critica Letteraria

“Cognetti’s novel elegantly paints the terrifyingly beautiful landscape of the mountains at the heart of a brotherly friendship that proves to transcend anything.”–Booklist

"A slim novel of startling expansion that subtly echoes its setting."–Vogue

“A moving meditation on man in time and nature.”—World Literature Today

“The Eight Mountains is an old-fashioned novel in the best sense of the word. With gorgeously understated, unhurried prose, Cognetti crafts the story of an unlikely friendship between a city boy named Pietro and a young cow herder, Bruno, who lives in the Alpine mountains where the members of Pietro’s family spend their vacations….Cognetti’s mix of patient observation and sharp insight into the natural world recalls the mastery of Helen Macdonald’s H Is for Hawk….Even though Pietro is solitary and remote, one can’t help caring for him. The brilliant writing helps, but there’s something more: His love for nature is profound, a sign that deep currents swirl beneath his crotchety surface, pulling the reader into the vortex of his emotions. Carnell and Segre capture the tone of Cognetti’s calm descriptions of nature, setting them in tense contrast with Pietro’s discordant thoughts.”— New York Times Book Review

“The Eight Mountains is written in such arrestingly simple language – you can almost feel the Italian phrasing in the translation from Simon Carnell and Erica Segre – that it’s impossible not to be gradually sucked into the peaks and valleys of Pietro’s life….[T]here’s something about the vertiginous setting that lends itself to this kind of contemplation. Cognetti captures the elation and melancholy that comes with reaching a spectacular summit, only to realize the minuscule part we play in the panorama of life.”—The Guardian

“There is something of [Cognetti’s] countryman Primo Levi in the wonderfully lucid sentences and contemplative tone of his prose….a beautifully crafted piece of writing, whose inevitable conclusion movingly sees the past repeat itself.”—Irish Times

"The Eight Mountains is a novel about love for the mountains, but more than that it is about those male relationships that rely on the slow accumulation of understanding where nothing is directly expressed: men, while feeling a lot, say very little, and tragically, sometimes this can be fatal. Cognetti’s novel, poetic and properly romantic, achieves a moving grandeur.” —Sunday Times (UK)

“Cognetti captures the elation and melancholy that come with reaching a spectacular summit, only to realize the miniscule part we play in the panoarama of life.” —The Observer (UK)

Paolo Cognetti is an Italian writer, novelist, and editor from Milan. He divides his time between the city and his cabin in the Italian Alps. He is the author of The Wild Boy and The Eight Mountains, an international sensation that won  Italy's Strega Prize and the French Prix Médicis étranger.
Loading...
or
Not Currently Available for Direct Purchase