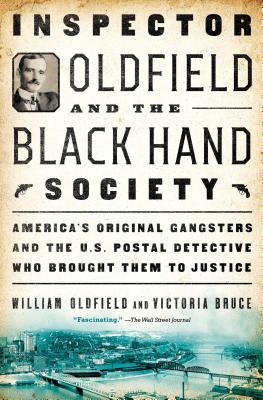 The “fascinating…great-grandson’s account” (The Wall Street Journal) of the US postal inspector who brought to justice the deadly Black Hand is “unputdownable” (Library Journal, starred review).

Before the emergence of prohibition-era gangsters like Al Capone and Lucky Luciano, there was the Black Hand: an early twentieth-century Sicilian-American crime ring that preyed on immigrants from the old country. In those days, the FBI was in its infancy, and local law enforcement were clueless against the dangers. Terrorized victims rarely spoke out, and the criminals ruled with terror—until Inspector Frank Oldfield came along.

In 1899, Oldfield became America’s 156th Post Office Inspector—joining the ranks of the most powerful federal law enforcement agents in the country. Based in Columbus, Ohio, the unconventional Oldfield brilliantly took down train robbers, murderers, and embezzlers from Ohio to New York to Maryland. Oldfield was finally able to penetrate the dreaded Black Hand when a tip-off put him onto the most epic investigation of his career, culminating in the 1909 capture of sixteen mafiosos in a case that spanned four states, two continents—and ended in the first international organized crime conviction in the country.

Hidden away by the Oldfield family for one hundred years and covered-up by rival factions in the early 20th century Post Office Department, this incredible true story out of America’s turn-of-the-century heartland will captivate all lovers of history and true crime. “I tip my hat to Inspector Oldfield. He was way ahead of his time and his efforts are magnificently relived in this book” (Daniel L. Mihalko, former Postal Inspector in Charge, Congressional & Public Affairs).

Praise For Inspector Oldfield and the Black Hand Society: America's Original Gangsters and the U.S. Postal Detective Who Brought Them to Justice…

'An inspector should go quietly about his business, avoiding newspaper notice or self-advertisement.' – Manual of Instructions for Post Office Inspectors. Thankfully, Inspector Frank Oldfield paid no attention to these instructions! This book not only captures the investigative exploits of Oldfield’s relentless pursuit of the Black Hand, but shows what a masterful public relations machine he was for the Postal Inspection Service – and for Frank Oldfield. As someone who has worked hard to raise the profile of Postal Inspectors from the 'Silent Service' image, I tip my hat to Inspector Oldfield. He was way ahead of his time and his efforts are magnificently relived in this book.
—Daniel L. Mihalko, Postal Inspector in Charge, Congressional & Public Affairs (Retired)

“It’s filled with colorful characters… neatly balances the old family stories with a solid historical perspective on the time and place. The combination makes for an intriguing look at a forgotten piece of Ohio’s history.”
—Columbus Dispatch

“Inspector Oldfield and The Black Hand Society” is part family history and part history of a terrorist crime group that was finally rounded up by a dedicated Post Office inspector. It is a well-written and well-researched book that will interest students of crime and history."
—Washington Times

“A simply riveting read from cover to cover... a unique and extraordinary study that will prove to be an immediately popular and enduringly valued... Impressively informative and exceptionally well written, organized and presented.”
—Midwest Book Review

“Drawing on a treasure trove of family records, Oldfield and coauthor Bruce (No Apparent Danger) use the remarkable life of the author’s great-grandfather, Frank Oldfield, to illuminate the little-known role of federal postal inspectors in federal law enforcement at the turn of the 20th century... A captivating summary of the origins of the U.S. postal system adds intrigue to this lucid blend of true crime and history.”
—Publishers Weekly

William Oldfield is an archivist and historical lecturer. He is currently engaged in entrepreneurial pursuits in the areas of environmental and sustainable operations. He grew up in Akron, Ohio, and currently lives in Annapolis, Maryland.

Victoria Bruce is the author of No Apparent Danger, Hostage Nation, and Sellout. She is the recipient of the Alfred I. duPont-Columbia University Award for excellence in broadcast journalism for her film, The Kidnapping of Ingrid Betancourt. She lives in Anne Arundel County, Maryland.
Loading...
or
Not Currently Available for Direct Purchase