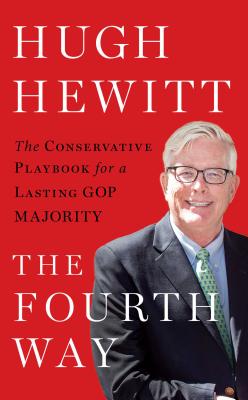 The Conservative Playbook for a Lasting GOP Majority

From “the nearly professorial power-baron of conservative media” (Bloomberg), a handbook for how a united GOP government can solve problems and guarantee political success.

Hugh Hewitt interviewed candidate Trump fifteen times on his nationally syndicated show during the 2016 campaign and participated as a panelist in four primary debates. What he learned from those news-making moments, along with his service for two Republican Presidents and his intimate knowledge of Washington, puts him in a perfect position to spell out how Trump and a unified GOP can transform the country and earn a lasting place in history. From defense to immigration, from entitlements to health care, Hewitt outlines how the new President, with the top leaders in Congress and with allies in fifty statehouses, can use November’s stunning result to find a Fourth Way out of the gridlock and the destructive showdowns that have marked the past quarter century of American politics.

Hugh Hewitt is a lawyer, professor, and broadcast journalist whose nationally syndicated radio show is heard in more than 120 cities across the United States every weekday morning. An analyst for NBC News and MSNBC and a contributing columnist to The Washington Post, he is the author of more than a dozen books, including Hugh Hewitt’s Little Red Book. Hewitt is a graduate of Harvard College and the University of Michigan Law School, and has taught Constitutional Law at Chapman University Law School since it opened in 1995. He is a partner with the Los Angeles law firm of Larson O’Brien LLP and writes daily at HughHewitt.com.

Praise For The Fourth Way: The Conservative Playbook for a Lasting GOP Majority…

“The world would be a better place if President Trump, Vice President Pence, House Speaker Ryan and Senate Majority Leader McConnell read Hugh Hewitt’s new book, The Fourth Way. In just 281 pages, it manages to offer the incoming Republican government a plausible and attractive plan of action, the effects of which, as envisioned by Hewitt, would undoubtedly please many on the right.”
or
Not Currently Available for Direct Purchase
Copyright © 2020 American Booksellers Association