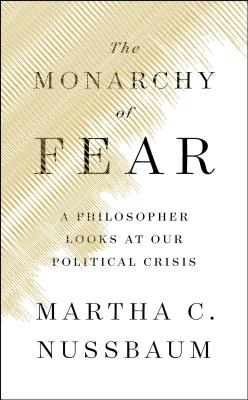 The Monarchy of Fear

"It feels like there’s been nothing but talk of division in our country since at least 2016, but many of us can’t pinpoint how it began. Martha C. Nussbaum attempts to do just that in The Monarchy of Fear." —Bustle


"Her book weaves together elements of history, philosophy, and human psychology in evaluating of the role fear in contemporary politics—and its dangers." —Chicago Magazine

"Like much of Nussbaum’s work, it is a philosophy lesson culled from the details of everyday living. And yet what follows is less predictable — a clear-eyed excavation of the foundation of our fears." —Chicago Tribune

"The Monarchy of Fear: A Philosopher Looks at Our Political Crisis is an engaging blend of current events, theoretical argument, and examples drawn from literature....Nussbaum's vision is attractive, even inspiring." —Pacific Sun

"[Monarchy of Fear is] a learned and urgent meditation on the one emotion that seems to be informing or contaminating public conversation in America as well as (much to our dismay) in the rest of the world. Nussbaum is very good at establishing the links between fear and tributary emotions such as anger and envy...the book is not only prescient: it is a user’s manual for the present day." —Publishers Weekly

Martha C. Nussbaum is the Ernst Freund Distinguished Service Professor of Law and Ethics, appointed in the Philosophy Department and the Law School of the University of Chicago. She gave the 2016 Jefferson Lecture for the National Endowment for the Humanities and won the 2016 Kyoto Prize in Arts and Philosophy. The 2018 Berggruen Prize in Philosophy and Culture, and the 2020 Holberg Prize. These three prizes are regarded as the most prestigious awards available in fields not eligible for a Nobel. She has written more than twenty-two books, including Upheavals of Thought: The Intelligence of Emotions; Anger and Forgiveness: Resentment, Generosity, Justice; Not for Profit: Why Democracy Needs the Humanities; and The Monarchy of Fear.
Loading...
or support indie stores by buying on