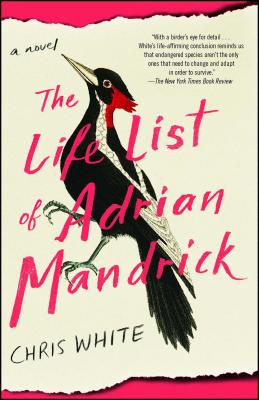 “With a birder’s eye for detail, White takes us on [Adrian Mandrick’s] painful, near death descent…[her] life-affirming conclusion reminds us that endangered species aren’t the only ones that need to change and adapt in order to survive.”—The New York Times Book Review

H Is for Hawk meets Grief Is the Thing with Feathers in this evocative debut novel about a pill-popping anesthesiologist and avid birder who embarks on a quest to find one of the world’s rarest species, allowing nothing to get in his way—until he’s forced to confront his obsessions and what they’ve cost him.

Adrian Mandrick seems to have his life in perfect order with an excellent job in a Colorado hospital, a wife and two young children he loves deeply, and a serious passion for birding. His life list comprises 863 species correctly identified and cataloged—it is, in fact, the third longest list in the North American region.

But Adrian holds dark secrets about his childhood—secrets that threaten to consume him after he’s contacted by his estranged mother, and subsequently relapses into an addiction to painkillers. In the midst of his downward spiral, the legendary birder with the region’s second-longest life list dies suddenly, and Adrian receives an anonymous tip that could propel him to the very top: the extremely rare Ivory-billed Woodpecker, spotted deep in the swamplands of Florida’s Panhandle.

Combining sharp, elegant prose with environmental adventure, The Life List of Adrian Mandrick is a poignant, engaging story that heralds the arrival of a new literary talent.

Praise For The Life List of Adrian Mandrick: A Novel…

"Beautiful and fascinating...The Life List of Adrian Mandrick is a riveting and heart-rending book about birds, love, and the fleeting unknown.” – Sy Montgomery, New York Times bestselling author of The Soul of an Octopus

"The Life List of Adrian Mandrick is a poignant story of a man whose epic search for glory forces him to face his own human failures, all set against the backdrop of a stunning, natural world that there’s still time to save."—Courtney Maum, author of Touch and I Am Having So Much Fun Here Without You

"An immensely affecting observation of human nature and foibles.”—Chicago Review of Books

“Stunning and lyrical, The Life List of Adrian Mandrick will make you want to both slow down to savor every elegant sentence and tear through for the heart-pounding plot—I couldn’t put it down. A masterful debut from a profound talent.”—Lisa Duffy, author of The Salt House

“The Life List of Adrian Mandrick is impossible to put down: it’s dramatic and fast-paced on every page, but still a poignant and intense look at a man and family reaching breaking point.” – Claire Fuller, author of Swimming Lessons and Our Endless Numbered Days

"Far from an everyday bird book, The Life List of Adrian Mandrick takes our hobby as the starting point for a thoughtful look at how memory and the truth can be manipulated and sometimes ultimately restored."—Vermilion Flycatcher

“[Adrian Mandrick] heads into the heart of darkness, and runs smack into his past… White makes Adrian a complex and oddly appealing character.”—Publishers Weekly

Chris White is an award-winning playwright and screenwriter, with an MFA in dramatic writing from NYU’s Tisch School of the Arts. Her plays have been produced nationally and internationally, and her play, Rhythms, won the Helen Hayes Award for Outstanding New Play. She received an Award of Merit at the Women’s Independent Film Festival for her feature-length screenplay, Weasel in the Icebox, and her short film, Mud Lotus, was an official selection at the New Hampshire, Albany, and Cincinnati Film Festivals. White is a professor of English at DePauw University teaching creative writing. She lives near the town of Bainbridge, Indiana on Big Walnut Creek. The Life List of Adrian Mandrick is her first novel.
Loading...
or support indie stores by buying on