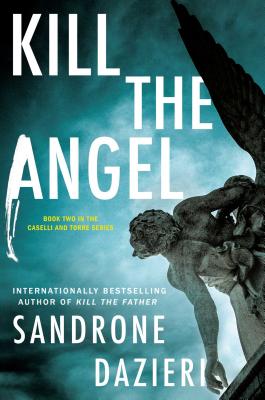 A Novel (Caselli and Torre Series #2)

From the wildly inventive mind of thriller master Sandrone Dazieri, whose first novel featuring investigators Colomba Caselli and Dante Torre, Kill the Father, was an international bestseller, comes the ingenious second novel in the series, Kill the Angel.

In Rome, a high-speed train hurtles into the city’s main station with a carriage full of dead bodies, the macabre discovery of which falls to Deputy Police Commissioner Colomba Caselli. Subsequently, the police receive a claim of responsibility and the threat of more murders to come. But neither Caselli nor her eccentrically brilliant ally, Dante Torre, are yet ready to buy the terrorist link.

As the two maverick investigators puncture the façade of what the perpetrator wants everyone to believe, they come close to dying several times.

Not for the first time, Dante’s bizarre childhood, during which he was kept confined for years in a concrete silo, enables him to see what others miss, and in this case, to connect with a kindred spirit of sorts, a woman named Giltine who experienced an equally bizarre childhood from which she emerged damaged, lethal, and full of murderous intent.

Adding to Giltine’s eerie fierceness is that, as the victim of a rare mental illness, she believes she’s already dead. She’s unacquainted with fear. And that makes her the most formidable foe Colomba and Dante have faced yet.

As the story climaxes, the duo finds themselves utterly on their own, on the outs with law enforcement and the only ones with a chance to make sure the waters of Venice don’t turn red with blood.

Sandrone Dazieri is the bestselling author of numerous novels and screenplays. Kill the Father, the first novel in his series featuring Colomba Caselli and Dante Torre, was an international bestseller and received spectacular praise for its highly unconventional detective duo. Kill the Angel was also a bestseller, and Kill the King is the third and final novel in the series. You can follow him on Twitter @SandroneDazieri.

Praise For Kill the Angel: A Novel (Caselli and Torre Series #2)…

“Explosive . . . [With] unrelentingly suspenseful effect, [Dazieri] once again exits with a cliff-hanger. With complex and fallible characters and nonstop action, this is prime international crime fiction and a great fit for followers of David Hewson’s Rome-set Nic Costa series.”
—Booklist (Starred Review)

Praise for Kill the Father:

“Colomba Caselli and Dante Torre are certainly the most audacious characters to emerge in crime fiction in many moons…. [The book] has more climaxes than a brothel on a Saturday night.  It’s almost like those 15 chapter serials we saw at the movies when we were kids…with each episode ending with a cliffhanger…Dazieri is an inventive and original writer.”
—David Rothenberg on WBAI Radio

“Absorbing, disturbing, clever, bizarre, original and brutal. The outline of the plot is simple, its execution thrilling.”
—The Times of London (Book of the Month)

“This [debut] introduces us to two of the most intriguing detectives to have emerged in recent years… Brutal and frighteningly realistic, it never loses its grip.”
—Daily Mail

“Already a bestseller throughout Europe, and receiving fantastic advance praise… [a] fascinatingly complex thriller.”
—i newspaper

"Kill the Father starts with the investigation of a murder-kidnapping then shows its two intriguing heroes following surprising twists and turns to an unexpected ending. Truly original thrillers are rare, but Sandrone Dazieri has written one."
—Phillip Margolin, New York Times bestselling author of Violent Crimes
or support indie stores by buying on
Copyright © 2020 American Booksellers Association