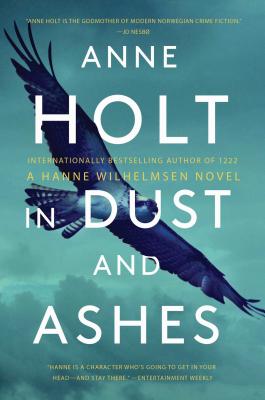 In Dust and Ashes

In 2001, three-year-old Dina is killed in a tragic car accident. Not long thereafter Dina’s mother dies under mysterious circumstances, and Dina’s father Jonas is convicted of her murder.

Now it’s 2016, and the cold case ends up on the desk of Detective Henrik Holme, who tries to convince his mentor Hanne Wilhelmsen that Jonas might have been wrongly convicted. Holme and Wilhelmsen discover that the case could be connected to the suicide of an eccentric blogger, as well as the kidnapping of the grandson of a EuroJackpot millionaire.

Twenty-four years in the writing, the ten books in Anne Holt’s bestselling international series is now complete. “Hanne is a character who’s going to get in your head—and stay there” (Entertainment Weekly). In Dust and Ashes is the exciting, not-to-be-missed conclusion to this terrific series.

“Holt closes her series with one of its strongest entries, combining generous sensitivity to all with an unblinking portrait of [her] franchise sleuth.” —Kirkus Reviews

“Wilhelmsen is as intuitive, and prickly, as ever, as Holt explores further the relationship between Wilhelmsen and Holme. For fans of Jo Nesbø, who has noted Holt’s primacy in Norwegian crime fiction, and of the genre in general.” —Booklist

"A good old-fashioned murder mystery. Wherever Hanne shows up next, my advice is to follow that wheelchair."
—Marilyn Stasio, The New York Times Book Review

Anne Holt is Norway’s bestselling female crime writer. She was a journalist and news anchor and spent two years working for the Oslo Police Department before founding her own law firm and serving as Norway’s Minister for Justice in 1996 and 1997. Her first novel was published in 1993 and her books have been translated into over thirty languages and have sold more than 7 million copies. Her novel 1222 was nominated for an Edgar Award for Best Novel. She lives in Oslo with her family.
or support indie stores by buying on