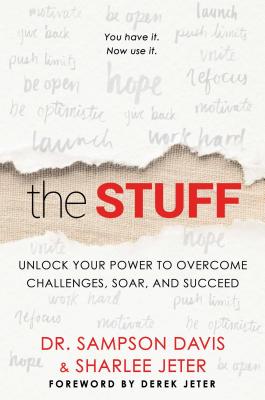 Unlock Your Power to Overcome Challenges, Soar, and Succeed

“Sampson and Sharlee’s message of the power of positivity, hard work, and resilience is one that we need to hear right now.” —Chris Gardner, #1 New York Times bestselling The Pursuit of Happyness

Everyone has difficult moments in life. But everyone also has the Stuff to overcome hardships, to survive and thrive.

Learn how to better access and hone the eleven core elements of the Stuff and be inspired by the real-world stories of triumph in this practical book by New York Times bestselling author Dr. Sampson Davis (The Pact, Living and Dying in Brick City) and Sharlee Jeter (Turn 2 Foundation).

Everyone has those moments in life when they’re truly tested, when they wonder if they have the strength to overcome the challenges before them. We’ve all heard stories of people who have risen up in the face of the unimaginable. But not everyone believes that they have what it takes to do the same.

However, what we need to realize our own potential—to fight for what we want our lives to be—already resides within each of us. You already have the Stuff. Learning how to develop and harness it is the key.

Survivors themselves, Dr. Sampson Davis and Sharlee Jeter have created The Stuff Movement, interviewing dozens of people to find the common threads that enabled them to triumph over their challenges. Through the powerful stories of people who overcame cancer, poverty, toxic relationships, racism, violence, career roadblocks, and other obstacles big and small—The Stuff highlights eleven core elements that will help you not only survive but thrive in spite of life’s difficulties. These elements are as easy to understand as they are to enact—presented in plain talk, without judgment, and with compassion for the everyday challenges people face.

As Dr. Davis and Sharlee share stories of the amazing people who’ve shown their Stuff, you’ll find that unearthing the same Stuff within yourself is a process as rewarding as it is important—and you’ll never say you can’t do it again.

Read the book, and join the conversation at TheStuffMovement.com.

Praise For The Stuff: Unlock Your Power to Overcome Challenges, Soar, and Succeed…

“The Stuff teaches its lessons of survival and success through the poignant, inspiring stories of everyday heroes and heroines. Sampson and Sharlee’s message of the power of positivity, hard work, and resilience is one that we need to hear right now.”

—Chris Gardner, author of the #1 New York Times bestselling The Pursuit of Happyness

“One of the most inspiring and motivating books of our time. Sampson and Sharlee solidify their contribution to our society by writing something that is lasting, important, and impactful—a must-read for employers and employees, athletes, parents, and students everywhere."

"Dr. Sampson Davis and Sharlee Jeter find inspiration in adversity, life lessons in travail. They draw upon their own dire experiences, and those of others, to deliver a resonant message: Everyone has the Stuff. And everyone should read this book."

“When faced with tragedy, everyone needs help getting back to a place where they can survive, thrive, and live again. The way Sharlee and Sampson discuss the inspiring stories of people who have done just that makes The Stuff an especially powerful book for those needing guidance.”

“Choosing to hope is the first step in overcoming any difficulty, large or small. With The Stuff, Sampson and Sharlee show you how that power feeds into the whole process of success. What a wonderful handbook for hope.”

Sharlee Jeter is the president of the Turn 2 Foundation, which was established by her brother, baseball legend Derek Jeter. The Foundation has successfully channeled fundraising power into results as demonstrated by its signature initiative, Jeter’s Leaders, a leadership development program for high school students. Sharlee also oversees the children’s division of Jeter Publishing, which has published New York Times bestsellers The Contract and its follow up, Hit & Miss. Born and raised in Kalamazoo, Michigan, Sharlee currently resides in Brooklyn, New York, with her son Jalen.

Dr. Sampson Davis is an emergency room physician, public speaker, philanthropist, and New York Times bestselling author. In 2000, he helped found The Three Doctors Foundation, which offers a series of free public programs focused on health, education, leadership, and mentoring. Dr. Davis was honored in 2000 with the Essence Lifetime Achievement Award as well as named one of their forty most inspirational African Americans in the country. He is the youngest physician to receive the National Medical Association highest honor and was honored on national television with the 2009 BET Awards. Dr. Davis has coauthored New York Times bestselling books, The Pact, We Beat the Street, The Bond, and Living and Dying in Brick City: An ER Doctor Returns Home.