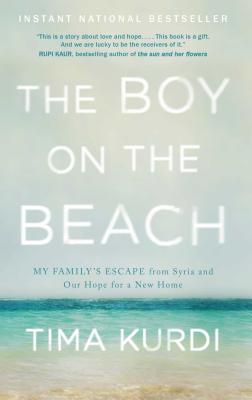 In The Boy on the Beach, Tima recounts her idyllic childhood in Syria, where she grew up with her brother Abdullah and other siblings in a tight-knit family. A strong-willed, independent woman, Tima studied to be a hairdresser and had dreams of seeing the world. At twenty-two, she emigrated to Canada, but much of her family remained in Damascus. Life as a single mother and immigrant in a new country wasn’t always easy, and Tima recounts with heart-wrenching honesty the anguish of being torn between a new home and the world she’d left behind.

As Tima struggled to adapt to life in a new land, war overtook her homeland. Caught in the crosshairs of civil war, her family risked everything and fled their homes. Tima worked tirelessly to help them find safety, but their journey was far from easy. Thwarted by politics, hounded by violence, and separated by vast distances, the Kurdis encountered setbacks at every turn, but they never gave up hope. And when tragedy struck, Tima suddenly found herself thrust onto the world stage as an advocate for refugees everywhere, a role for which she had never prepared but that allowed her to give voice to those who didn’t have an opportunity to speak for themselves.

From the jasmine-scented neighbourhoods of Damascus before the war to the streets of Aleppo during it, to the refugee camps of Europe and the leafy suburbs of Vancouver, The Boy on the Beach is one family’s story of love, loss, and the persistent search for safe harbour in a devastating time of war.

Praise For The Boy on the Beach: My Family's Escape from Syria and Our Hope for a New Home…

"An impassioned plea for the rights of refugees through the heartbreaking account of one family’s unimaginable loss. . . . elegant and deeply moving . . . This is an accomplished and searing political memoir—one woman’s poignant and pointed eulogy for a nephew who deserved more than passing notoriety as the 'boy on the beach.'"
— Washington Post

“Tima’s prose adds layers of beauty to one of the most powerful photographs of our time. This is a story about love and hope. About one of the most important aspects of our human experience: the meaning of family. This book is a gift. And we, are lucky to be the receivers of it.”
— Rupi Kaur, bestselling author of The Sun and Her Flowers and Milk And Honey

“The indelible photo of little Alan Kurdi’s body lying face down on sand tore my heart open.  I was gutted all over again reading this book.  No statistic or news story will evoke the true horrors of the Syrian war … as this moving and searing saga of the Kurdi family. The leader of every nation that has a stake in the Syrian war should read Tima Kurdi’s book.”
— Khaled Hosseini, bestselling author of The Kite Runner

“Tima, with the help of a writer, proves an impassioned narrator, sharing sorrow, anxiety and guilt without reservation, and humanizing the refugee crisis time and time again. The Boy on the Beach is at once the story of the Kurdi family, and of humanity as a whole. It’s the story of what happens when we forget that we’re all connected. But it’s also a testament to kindness, and love, and what we all stand to gain from embracing that.”
— Vancouver Sun

"Kurdi’s intimate and tragic account of her family’s escape from civil war-torn Syria illuminates the human element of the refugee crisis. . . . This is a moving tale of displacement, tragedy, and family."
— Publishers Weekly (starred review)

“One of the most important books I have ever read, a work of alchemy and truth.  The family story of little Alan Kurdi is horrifying, yet it is catapulted along by a force that is bigger than mere suspense; love. Fierce love. Stubborn love, even in the furnace of hell. Determined, relentless, hungry love that refuses to give up. It is both a call to action and a sobering reminder of what has already been lost.”
— Amanda Lindhout, co-author of A House in the Sky

“An important book. . . . Read it. Think. Feel. Then find a way to take a step toward hope. It all starts with you and me. We can save lives.”
— Marina Nemat, bestselling author of Prisoner of Tehran

“This book leaves the reader raw and incredulous. The light of the story is that Tima and Abdullah are bringing the plight of refugees to the attention of the world. This speaks to their amazing tenacity and courage. I stand in awe.”
— Lorinda Stewart, bestselling author of One Day Closer

Tima Kurdi is an internationally recognized spokesperson who has partnered with governments, businesses, and citizens worldwide to help raise awareness about the global refugee crisis. She, along with her brother Abdullah, is the co-founder of the Kurdi Foundation. Tima lives with her husband and son in Coquitlam, British Columbia. Visit her at KurdiFoundation.com or follow her on Twitter @TimaKurdi.
Loading...
or support indie stores by buying on