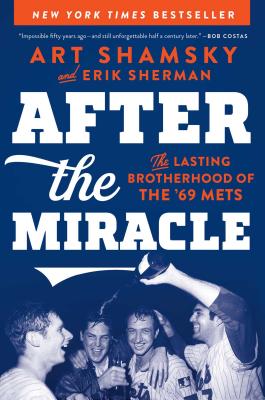 The inside account of an iconic team in baseball history: the 1969 New York Mets—a consistently last-place team that turned it all around in just one season—told by ’69 Mets outfielder Art Shamsky, Hall of Fame pitcher Tom Seaver, and other teammates as they reminisce about what happened then and where they are today.

Playing right field for the ’69 Mets was Art Shamsky, who had stayed in touch with his former teammates over the years. He hoped to get together with star pitcher Tom Seaver (who would win the Cy Young award as the best pitcher in the league in 1969 and go on to become the first Met elected to the Hall of Fame) but Seaver was ailing and could not travel. So, Shamsky organized a visit to Tom Terrific in California, accompanied by the #2 pitcher, Jerry Koosman, outfielder Ron Swoboda, and shortstop Bud Harrelson. Together they recalled the highlights of that amazing season as they reminisced about what changed the Mets’ fortunes in 1969.

With the help of sportswriter Erik Sherman, Shamsky has written After the Miracle for the 1969 Mets. This is a book that every Mets fan—and every baseball fan—must own.

Praise For After the Miracle: The Lasting Brotherhood of the '69 Mets…

“I just finished reading Art Shamsky’s new book about those ‘69 Miracle Mets and their upset victory over the vaunted Baltimore Orioles. I was a sophomore in high school and this book brought back all those vivid memories of that series. A great and insightful read.”
— Keith Hernandez

"Charming. . . . a touching rendering of loving comrades reuniting to share memories of past glory. Messrs. Seaver and Harrelson are also astonishingly open about their ailments. I can only express my gratitude, as someone who grew up adoring these two great athletes from afar, for the glimpse this book affords into their elegance and bravery in the face of hard times."
— Alva Noë

“Not since Halberstam’s The Teammates: Portrait of a Friendship, have I read a more heartfelt and inspiring book about what it means to be linked forever.  I personally know the kindness of the author, Art Shamsky, only he could pull off this hilarious and melancholy look at getting old but remaining forever young because of their shared ‘miracle’ in 1969.”
— Ron Darling

“Impossible fifty years ago — and still unforgettable half a century later.”

"After the Miracle is touching and beautiful—a magical book about a magical team.”
— Jonathan Eig, author of Luckiest Man, Opening Day, and Ali: A Life

"Wasn't that a time? When the last became first and anything seemed possible, in baseball and in life? After the Miracle recalls those thrilling days for now-old boys like me, and shows a new generation of fans that losing serves only to sweeten victory. Warmly and wistfully, Art Shamsky and Erik Sherman reunite the boys of summer, fifty years later."
— John Thorn, Official Historian of Major League Baseball and author of Baseball in the Garden of Eden

“A highly intimate portrait of the men whose half-century ago miracle continues to enchant us.  A must for anyone who witnessed their greatness, or wishes they had.”
— Gary Cohen, SNY play-by-play announcer

“Teams win championships every year; the '69 Mets transcended victory. They defined an era and changed lives. Mine is one of them. Their story and their obvious bond is eternal.”
— Howie Rose, broadcaster, New York Mets

“The Miracle Mets were my team growing up as a kid in Brooklyn. I love how Art gives you all the locker room banter and how the guys kidded with each other. I thought I knew all there was about the 1969 Mets but this book  proves there is so much more to learn about the  team that captivated the city and the country.”
— John Franco

"This heartfelt, nostalgic memoir will delight baseball fans of all ages and allegiances."
— Publishers Weekly

“A fond remembrance of a legendary baseball team . . . .  An enjoyable tale of a storybook season.”
— Kirkus Reviews

“Shamsky's account of the 1969 season is exceptional, as is his handling of the team’s disparate personalities, the national context in which the Mets staged their Miracle (it was a year for miracles—the first manned moon landing took place less than three months before the World Series), and the coverage of the racial amity on the team.”
— Booklist

Art Shamsky was a Major League baseball player for eight years, and an integral part of the World Championship team in 1969. Since his retirement from baseball, he has been involved in various businesses and worked as a sports broadcaster at WNEW-TV in New York City and on ESPN, and as a broadcaster for the NY Mets.

Erik Sherman is the author of the critically acclaimed Kings of Queens: Life Beyond Baseball With The ’86 Mets, and is also the coauthor of four highly acclaimed baseball autobiographies with Glenn Burke, Steve Blass, Mookie Wilson, and Davey Johnson. Erik is an annual lecturer at the National Baseball Hall of Fame in Cooperstown, New York.
Loading...
or
Not Currently Available for Direct Purchase