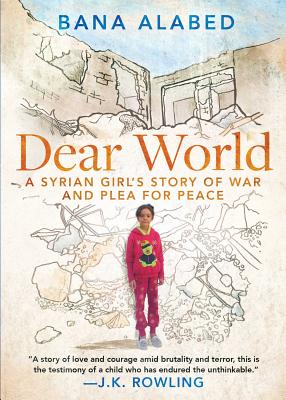 A Syrian Girl's Story of War and Plea for Peace

“A story of love and courage amid brutality and terror, this is the testimony of a child who has endured the unthinkable.” —J.K. Rowling

When seven-year-old Bana Alabed took to Twitter to describe the horrors she and her family were experiencing in war-torn Syria, her heartrending messages touched the world and gave a voice to millions of innocent children.

Bana’s happy childhood was abruptly upended by civil war when she was only three years old. Over the next four years, she knew nothing but bombing, destruction, and fear. Her harrowing ordeal culminated in a brutal siege where she, her parents, and two younger brothers were trapped in Aleppo, with little access to food, water, medicine, or other necessities.

Facing death as bombs relentlessly fell around them—one of which completely destroyed their home—Bana and her family embarked on a perilous escape to Turkey.

In Bana’s own words, and featuring short, affecting chapters by her mother, Fatemah, Dear World is not just a gripping account of a family endangered by war; it offers a uniquely intimate, child’s perspective on one of the biggest humanitarian crises in history. Bana has lost her best friend, her school, her home, and her homeland. But she has not lost her hope—for herself and for other children around the world who are victims and refugees of war and deserve better lives.

Dear World is a powerful reminder of the resilience of the human spirit, the unconquerable courage of a child, and the abiding power of hope. It is a story that will leave you changed.

Praise For Dear World: A Syrian Girl's Story of War and Plea for Peace…

"A modern-day Anne Frank.... just a year after she began tweeting, she has published a book, Dear World, out Tuesday, that tells the story of a young life circumscribed by war—a life where schools are bombed, friends die, parents are taken away for days at a time, food and water are scarce (if available at all), and a trip to the playground is a distant memory."–The New York Post

"Told from a child's perspective, the story is stripped down to its simplest elements, throwing the tragedy of the thing into sharp relief."–Glamour/The Girl Project

"She continues to tell her painful yet hopeful story in Dear World....giving a fuller picture of how their family, along with many others, have been affected by the ongoing war."–Bustle

"A harrowing memoir of life under siege....an unadulterated account of war through the eyes of a child."–REUTERS

Bana Alabed, born in 2009 in Aleppo, Syria, is known worldwide for her tweets during the siege of the city in 2016 and for her subsequent calls for peace and an end to all global conflict. Her tweets have earned her legions of admirers around the world by giving a remarkable insight into the daily horrors of life in the city, including airstrikes, hunger, and the prospect of her family’s death. In December 2016, Bana and her family were safely evacuated from Aleppo to Turkey. When she grows up, Bana would like to become a teacher, like her mother. Her father is a lawyer, and she has two younger brothers, Noor and Mohamed. She wrote Dear World and My Name Is Bana.
Loading...
or
Not Currently Available for Direct Purchase