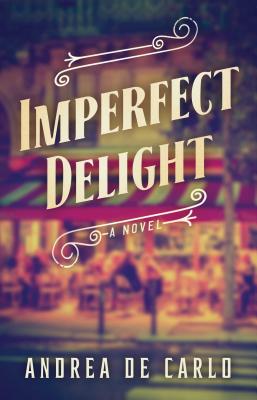 For fans of The Hundred-Foot Journey and The Altogether Unexpected Disappearance of Atticus Craftsman, a moving and charming novel from the beloved international author of Two Out of Two that follows two entirely different people struggling to make sense of their futures amid the beauty of Provence, France.

It’s fall in Provence, a season that combines the first chill of winter with a final stretch of warmth that is a last taste of summer. To mark the end of the season, at the local airfield a famous British rock band, the Bebonkers, will hold a concert that is both for charity and to celebrate charismatic lead singer Nick Cruickshank’s third marriage. Preparations are in high gear, everything coming smoothly together under the tight supervision of Aileen, Nick’s bride-to-be.

In town, there is also a gelateria run by Milena Migliari, who creates, develops, and produces one-of-a-kind ice cream with artistic precision. Milena, who has bid adieu to men, now lives with Viviane. Milena’s relationship with Viviane is solid and unwavering, in stark contrast to the delicacy of her ice cream. In a few days Milena will undergo fertility treatments, but she is not entirely convinced. She hesitates to confess her thoughts, however, as does Nick, who wonders when his relationship with Aileen lost its original spark.

And so, a British rocker and an Italian artisan find their fates on a collision course and in the space of three days, the chaos intensifies resulting in an inevitable and exhilarating final encore.

Praise For Imperfect Delight: A Novel…

“Only the title is wrong: it is a Perfect Marvel… as we read too rarely!”
— Sandrine Sebbane

“To be devoured in one bite.”
— Femme Actuelles

"A best-seller in its original Italian, De Carlo’s full sensory experience of a novel loses nothing in translation. Fans of Italo Calvino, Laura Madeleine, and Mary Simses will enjoy this refreshing story of two souls recognizing themselves in one another."
— Booklist Review

Andrea De Carlo was born in 1952 in Milan, Italy, where he grew up. After completing a degree in Contemporary History he traveled extensively, living for long periods of time in the United States and in Australia. He was discovered by Italo Calvino, who wrote the foreword to his first novel, Treno di panna. He has worked with Federico Fellini and with Michelangelo Antonioni, directing the short film, Le facce di Fellini, as well as a film based on his first novel. With Ludovico Einaudi he composed two ballets, Time Out and Salgari. A musician in his own right, he has recorded two albums, Alcuni nomi and Dentro Giro di vento. His novels have sold millions of copies and have been translated into twenty-six languages.
Loading...
or
Not Currently Available for Direct Purchase