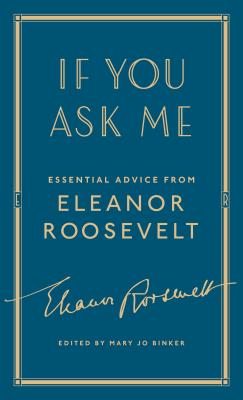 If You Ask Me

Experience the timeless wit and wisdom of Eleanor Roosevelt in this annotated collection of candid advice columns that she wrote for more than twenty years.

In 1941, Eleanor Roosevelt embarked on a new career as an advice columnist. She had already transformed the role of first lady with her regular press conferences, her activism on behalf of women, minorities, and youth, her lecture tours, and her syndicated newspaper column. When Ladies Home Journal offered her an advice column, she embraced it as yet another way for her to connect with the public. “If You Ask Me” quickly became a lifeline for Americans of all ages.

Over the twenty years that Eleanor wrote her advice column, no question was too trivial and no topic was out of bounds. Practical, warm-hearted, and often witty, Eleanor’s answers were so forthright her editors included a disclaimer that her views were not necessarily those of the magazines or the Roosevelt administration. Asked, for example, if she had any Republican friends, she replied, “I hope so.” Queried about whether or when she would retire, she said, “I never plan ahead.” As for the suggestion that federal or state governments build public bomb shelters, she considered the idea “nonsense.” Covering a wide variety of topics—everything from war, peace, and politics to love, marriage, religion, and popular culture—these columns reveal Eleanor Roosevelt’s warmth, humanity, and timeless relevance.

Praise For If You Ask Me: Essential Advice from Eleanor Roosevelt…

“Roosevelt emerges as blunt and opinionated, but also open, compassionate, and genuinely interested in others…Quotable and surprisingly timely, this optimistic book is both bracing and comforting.”
— Publishers Weekly

"The America that emerges through this 20-year sampling of Roosevelt's advice column is at once familiar and very long gone. We're still wrestling, of course, with arguments over civil liberties, national health care, the Electoral College and institutionalized racism and sexism. Roosevelt gamely weighed in on those "hot button" topics. But then there are a whole slew of other letters here that come out of an America so earnest it almost seems like the product of a work of speculative fiction . . . There's something very democratic about this 20-plus-year monthly "conversation" of sorts."— NPR's "Fresh Air"

"Heartwarming, smart, and at times even humorous, this book highlights a collection of Roosevelt's best columns and allows her warm wit and wisdom to shine as an uplifting and timely 'advice guide.'" — Woman's World

Eleanor Roosevelt (1884-1962) was an American politician, diplomat, writer, and activist. She is also the nation’s longest-serving First Lady (1933 to 1945). A committed advocate for democracy, civil rights, and social justice, she was tireless in her efforts to improve political, economic, and social conditions at home and abroad. She brought the same energy and devotion to her work at the United Nations where, as chair of the Human Rights Commission she played a key role in the creation and passage of the Universal Declaration of Human Rights (1948). A woman of her time who was also ahead of her time, she never gave up the struggle to create a better world because she believed that “lost causes are usually won in the end.”

Mary Jo Binker is a consulting editor for the Eleanor Roosevelt Papers Project at George Washington University. She has a master’s degree in history from George Mason University, where she is an adjunct professor. She was previously the director of the Oral History Program for the Women in Military Service to America Memorial Foundation in Arlington, Virginia. The recipient of the Evelyn Pugh Memorial Fellowship Award at George Mason University, Mary Jo publishes and lectures on the subjects of Eleanor Roosevelt, women’s history, the Great Depression, World War II, and the Cold War. Her work has appeared in Time and the Journal of White House History. She lives and works in Arlington, Virginia.
Loading...
or
Not Currently Available for Direct Purchase