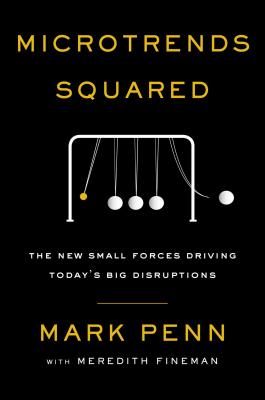 Ten years after his bestseller Microtrends, Mark Penn identifies the next wave of trends reshaping the future of business, politics, and culture.

Mark Penn has boldly argued that the future is not shaped by society’s broad forces but by quiet changes within narrow slices of the population. Ten years ago, he showed how the behavior of one small group can exert an outsized influence over the whole of America. His bestselling Microtrends highlighted dozens of tiny, counterintuitive trends that have since come to fruition, from the explosion of internet dating to the recent split within the Republican Party.

Today, the world is in perplexing upheaval, and microtrends are more influential than ever. In this environment, Penn offers a necessary perspective.

Microtrends Squared makes sense of what is happening in the world today. Through fifty new microtrends, Penn illuminates the shifts that are coming in the next decade. He pinpoints the unseen hand behind new power relationships that have emerged—as fringe voters and reactionary politics have found their revival, as online influencers overshadow traditional media, and as the gig economy continues to invade new swathes of industry. He speaks to the next wave of developments coming in technology, social movements, and even dating.

Offering a clear vision of the future of business, politics, and culture, Microtrends Squared is a must-read for innovators and entrepreneurs, political and business leaders, and for every curious reader looking to under­stand the wave of the future when it is just a ripple.

Mark Penn has spent over forty years in polling, marketing, advertising, and strategy at the highest levels of business and politics. As a leading pollster, he was chief strategist in the presidential campaigns of Bill and Hillary Clinton and is credited with identifying the influential “soccer moms” trend. He has advised Bill Gates and Tony Blair, among other world leaders, as well as companies from Ford to Verizon to Merck to McDonald’s. Today he is Chairman of the Harris Poll and Managing Partner of the Stagwell Group, a collection of digital marketing firms. He is the author of the New York Times bestselling book Microtrends and has written for The Wall Street Journal, Politico, and other publications.

Meredith Fineman is the founder of FinePoint, a PR firm turned leadership company that elevates individuals, with a focus on women in positions of power. She is also a freelance writer of twelve years, with bylines in Harvard Business Review, Forbes, Inc., Entrepreneur, Elle, Marie Claire, Fast Company, and more.
Loading...
or
Not Currently Available for Direct Purchase