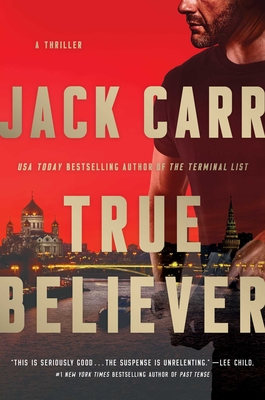 “Take my word for it, James Reece is one rowdy motherf***er. Get ready!”—Chris Pratt, star of The Terminal List, coming to Amazon Prime

In #1 New York Times bestselling author Jack Carr’s follow-up to The Terminal List, former Navy SEAL James Reece’s skill, cunning, and heroism put the US government back in his debt and set him on another path of revenge.

"Packs a punch. Carr's second effort is a well-crafted thriller with timely reflections on the increasingly complicated world of international terrorism."
— Kirkus Reviews

"A powerful read! Very few writers walk the line between pulse-pounding excitement and searing character development as well as Jack Carr. In TRUE BELIEVER, Carr delivers another engaging, action-packed read with an impossible-to-fake-authenticity other writers can only dream about. One of the best books of the year."
— Simon Gervais, former RCMP counterterrorism officer and internationally bestselling author of Hunt Them Down.

"This is one of those books where you love the action, but really look forward to where the author pulls back the curtain on subjects you never knew you might want to learn about… Just be careful - don’t start True Believer until you can read it through all the way to the end.  What a ride!"
— Kurt Schlichter, Senior Columnist at Townhall and author of Wildfire and Militant Normals

“It’s hard to stand out in the crowded field of former military men writing about the worlds they know, but Carr manages to do just that. . . Carr will make true believers out of fans who love the novels of Ben Coes, Brad Taylor, and Alex Berenson.”
— Booklist