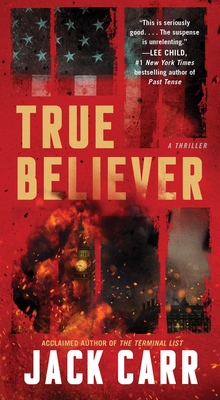 “Take my word for it, James Reece is one rowdy motherf***er. Get ready!”—Chris Pratt, star of The Terminal List, coming to Amazon Prime

“True Believer by Jack Carr is a powerful, thoughtful, realistic, at times terrifying thriller that I could not put down. A terrific addition to the genre, Jack Carr and his alter-ego protagonist, James Reece, continue to blow me away.”
— Mark Greaney, #1 New York Times bestselling author of MISSION CRITICAL

"If you like a fresh approach to action with authentic details and a believable main character, these books are for you.  I’m a fan."
— David Morrell, New York Times Bestselling Author of First Blood, The Brotherhood of the Rose, and Murder as a Fine Art

Jack Carr is a #1 New York Times bestselling author and former Navy SEAL. He is the author of The Terminal List, True Believer, and Savage Son. He lives with his wife and three children in Park City, Utah. Visit him at OfficialJackCarr.com and follow along on Instagram, Twitter, and Facebook at @JackCarrUSA.
Loading...
or support indie stores by buying on
(This book is on backorder)