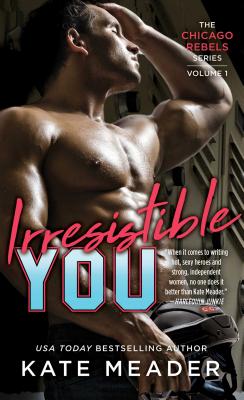 Irresistible You (The Chicago Rebels Series #1)

Harper Chase has just become the most powerful woman in the NHL after the death of her father Clifford Chase, maverick owner of the Chicago Rebels. But the team is a hot mess—underfunded, overweight, and close to tapping out of the league. Hell-bent on turning the luckless franchise around, Harper won’t let anything stand in her way. Not her gender, not her sisters, and especially not a veteran player with an attitude problem and a smoldering gaze designed to melt her ice-compacted defenses.

Veteran center Remy “Jinx” DuPre is on the downside of a career that’s seen him win big sponsorships, fans’ hearts, and more than a few notches on his stick. Only one goal has eluded him: the Stanley Cup. Sure, he’s been labeled as the unluckiest guy in the league, but with his recent streak of good play, he knows this is his year. So why the hell is he being shunted off to a failing hockey franchise run by a ball-buster in heels? And is she seriously expecting him to lead her band of misfit losers to a coveted spot in the playoffs?

Praise For Irresistible You (The Chicago Rebels Series #1)…

"Meader takes her readers on a breathtaking, non-stop, glorious ride. The sex scenes are lyrically written with fresh, descriptive prose... Readers will love the relationship between Remy and Harper, and will be excited for the next story [in the Chicago Rebels series]."
— RT Book Reviews, Top Pick (4 1/2 stars)

"[A] heart-stealing opener to the Chicago Rebels sports contemporary series... Meader's strength is creating characters who live, breathe, and jump off the page... The mix of sexual tension and emotional decisions will lead Meader's series launch to many a keeper shelf."
— Publishers Weekly (starred review)

"A charming hero who's sexy as sin and a smart, fierce heroine who gives him a run for his money? Yes please! I couldn't turn the pages fast enough."
— Kimberly Kincaid, USA Today bestselling author

“Meader’s writing is always impeccable, but she outdoes herself with this stellar contemporary romance. Flawless from start to finish, with smart dialog, sizzling sex scenes, and the perfect amount of sweet moments.”
— New York Times bestselling author Lauren Layne

"Cajun and a hockey player? Can you get any sexier?"
— About That Story

"Not even halfway through the year I think I've found my favourite romance of 2017."
— Love is a State of Mind

"Splendidly characterized."
— Publishers Weekly (A Most Anticipated Book of Fall 2017)

Originally from Ireland, Kate Meader cut her romance reader teeth on Maeve Binchy and Jilly Cooper novels, with some Harlequins thrown in for variety. Give her tales about brooding mill owners, oversexed equestrians, and men who can rock an apron, a fire hose, or a hockey stick, and she's there. Now based in Chicago, she writes sexy contemporary romance with alpha heroes and strong heroines (and heroes) who can match their men quip for quip. Visit her at KateMeader.com.
Loading...
or
Not Currently Available for Direct Purchase