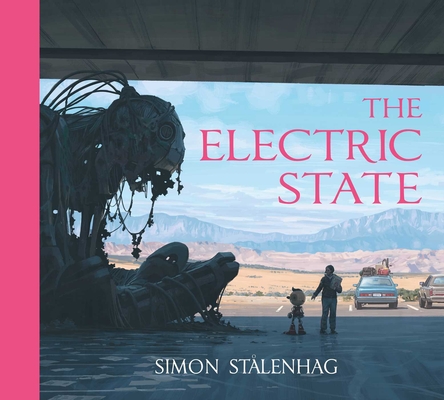 A teen girl and her robot embark on a cross-country mission in this illustrated science fiction story, perfect for fans of Ready Player One and Black Mirror.

In late 1997, a runaway teenager and her small yellow toy robot travel west through a strange American landscape where the ruins of gigantic battle drones litter the countryside, along with the discarded trash of a high-tech consumerist society addicted to a virtual-reality system. As they approach the edge of the continent, the world outside the car window seems to unravel at an ever faster pace, as if somewhere beyond the horizon, the hollow core of civilization has finally caved in.

Praise For The Electric State…

“A haunting illustrated novel. . . . Readers of bleak, emotionally rich dystopian science fiction will be fascinated with the way Stålenhag doles out details—all the way to the open-ended, heartbreaking conclusion.”
— Booklist (starred)

“An awe-inspiring vision of a species committing suicide, perhaps to be reborn as something new. [. . .] The Electric State is a striking and strangely compelling work of science fiction gothic. Providing a series of snapshots of an alternate Earth of yesteryear, it tells the story of how that world ended.”
— New York Journal of Books

"One part art-book, one part picture-book—the mundanity of everyday relationships play out alongside science fiction imagery that is as beautiful as it is unsettling."
— Waypoint

"[Simon Stålenhag's] stories crawl into my brain and mess with my memory of history, time, and place. His art (photorealistic, washed out, laced in neon or icicles, nostalgic and futuristic both at the same time) gets into my eyes and stays there. [. . .] If you're anything like me, you'll take those images to bed with you for a long time and dream of Stålenhag's America — lost to sand, to drought, to war, to loneliness, and stalked always by the low, distant rumble of something terrible rising out of the earth and coming for you."
— NPR Books

"[The] mix of science fiction and real world pop-culture nostalgia is instantly compelling, but there are layers to The Electric State that take the story beyond surface value. [. . .] In a way, it is an extremely American story, bringing together themes like the intersection of war and technology; fire-and-brimstone religion and its effect on LGBT youth; families separated by great physical distance while still being a part of the same country."
— Los Angeles Times

Simon Stålenhag is the internationally lauded artist and author of Tales from the Loop, Things from the Flood, and The Electric State—the narrative art books that stunned the world with a vision of an alternate 1980s and 1990s where technology had invaded the tranquil landscapes to form an entirely new universe of the eerie and the nostalgic. He lives in Stockholm, Sweden.
Loading...
or support indie stores by buying on