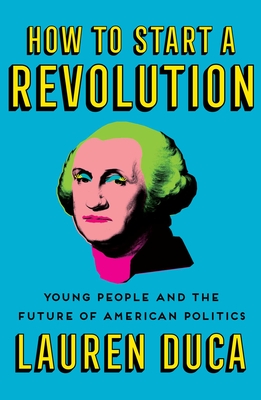 How to Start a Revolution

Young People and the Future of American Politics

Teen Vogue award-winning columnist Lauren Duca shares a smart and funny guide for challenging the status quo in a much-needed reminder that young people are the ones who will change the world.

A columnist at Teen Vogue, Lauren Duca has become a fresh and authoritative voice on the experience of millennials in today’s society. In these pages she explores the post-Trump political awakening and lays the groundwork for a re-democratizing moment as it might be built out of the untapped potential of young people.

Duca investigates and explains the issues at the root of our ailing political system and reimagines what an equitable democracy would look like. It begins with young people getting involved. People like Alexandria Ocasio-Cortez, the youngest woman ever to be elected to Congress; David and Lauren Hogg, two survivors of the Parkland, Florida shooting who went on to become advocates for gun control; Amanda Litman, who founded the nonprofit organization Run For Something, to assist progressive young people in down ballot elections; and many more.

Called “the millennial feminist warrior queen of social media” by Ariel Levy and “a national newsmaker” by The New York Times, Dan Rather agrees “we need fresh, intelligent, and creative voices—like Lauren’s—now as much—perhaps more—than ever before.” Here, Duca combines extensive research and first-person reporting to track her generation’s shift from political alienation to political participation. Throughout, she also draws on her own story as a young woman catapulted to the front lines of the political conversation (all while figuring out how to deal with her Trump-supporting parents).

Praise For How to Start a Revolution: Young People and the Future of American Politics…

“Lauren Duca is the kind of writer that makes you cackle, cheer, and, more important, confront where we are and where we need to go as a culture.”
—Janet Mock

“We need fresh, intelligent, and creative voices like Lauren’s now as much—perhaps more—than ever before.”
—Dan Rather

"Fun, pithy, and intelligent." YA: "By showing teens just how important they are in a fair and functional society, this is sure to encourage teen readers to get involved."
—Booklist

"In this inspiring guide...Duca’s conversational prose and clear passion for equality allow her to galvanize without preaching. This call to action will resonate even with those who are not already involved in progressive politics."
—Publishers Weekly

Lauren Duca is an award-winning journalist focused on destroying the white supremacist patriarchy and building equitable public power by empowering people to pursue ethical self-determination. Duca is best known for her massively viral piece “Donald Trump is Gaslighting America” in Teen Vogue and an interview with Tucker Carlson that launched her efforts fighting for young people—and especially young women—to insist on their right to the political conversation. Duca’s writing has appeared in The New York Times, The New Yorker, New York magazine, and other places without New York in the title, including The Independent and Out magazine. She’s mostly just trying to get you to follow her on Twitter: @LaurenDuca.
Loading...
or support indie stores by buying on