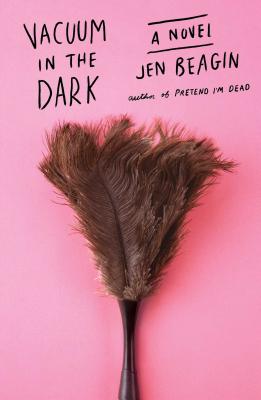 From the Whiting Award-winning author of Pretend I’m Dead and one of the most exhilarating new voices in fiction, a new hilarious, edgy, and brilliant one-of-a-kind novel about a cleaning lady named Mona and her struggles to move forward in life.

Dark and his wife aren’t the only complicated clients on Mona’s roster, either. There’s also the Hungarian artist couple who—with her addiction to painkillers and his lingering stares—reminds Mona of troubling aspects of her childhood, and some of the underlying reasons her life had to be restarted in the first place. As she tries to get over the heartache of her affair and the older pains of her youth, Mona winds up on an eccentric, moving journey of self-discovery that takes her back to her beginnings where she attempts to unlock the key to having a sense of home in the future.

The only problems are Dark and her past. Neither is so easy to get rid of.

A constantly surprising, laugh-out-loud funny novel about an utterly unique woman dealing with some of the most universal issues in America today, Vacuum in the Dark is an unforgettable, astonishing read from one of the freshest voices in fiction today.

"Fresh, strange, hilarious and very moving... I am so taken with this book. I loved it...It reminded me a bit of Dennis Johnson’s Jesus’s Son or a more hardcore, ravaged Lorrie Moore... Other writers work this road but few so affectingly. The main character is a cleaning woman whose scars from childhood neglect and abuse are deeper and more complicated than we first realize or she understands... Gradually she bewitches and in her way inspires the reader. She has a real heroism as she tries to reclaim her life and, like her creator, has an absolutely piercing eye. I totally capitulated to her when she compared one of her clients lizard-killing cats to the Manson family and my affection for her grew from there with leaps and bounds. She is an unintentional artist and her lack of ambition about it and her drive to do it because it is necessary is one of the many, many interesting things about this novel... The writing is spare and feels effortless. Like the heroine it doesn’t call undue attention to itself but hovers on the brink of danger... I am kind of in awe of Jen Beagin. I am so glad she’s out there and am running backwards at a rapid speed to find her first book."
— George Hodgman, author of Bettyville

"Vacuum in the Dark is wacky, wicked and funny on the surface but roiling below with danger and deep seriousness. Beagin’s writing style is breezy and light, and Mona is delightful and witty. This makes for enjoyable reading but ensures that the punches the book packs are hard-driving and always on target. Mona is refreshingly honest and heartbreakingly hurt. Beagin allows her protagonist to be strange and charming, sexual and smart, even as she forces Mona to confront pain, loss and uncertainty. This is a very good, original and human-hearted novel."
— Book Reporter

"Rib-ticklingly funny-sad... [Beagin] works magic in the space between hilarity and heartbreak... Absurdly affecting."
— O, the Oprah Magazine, a Best Book of 2018

“How can you resist a love story in which the object of desire is named Mr. Disgusting? Like Denis Johnson, Jen Beagin is able to find humanity and wonder (and yes, love) in some of the most forlorn and hopeless corners of our world.”
— Tom Perrotta, author of Mrs. Fletcher and The Leftovers

"Pretend I'm Dead by Jen Beagin is like one of those old-fashioned classics by Charles Bukowski or John Fante or, more recently, Denis Johnson, a shambling, lyrical dispatch from the dive bars and the flop houses where the downtrodden, divested of hope, livelihood, good health, and any number of other markers of respectability, nevertheless retain full possession of their hearts and minds, their integrity, their souls, too, perhaps--and no one nearly as triumphantly as Mona Boyle, Beagin's heart-breaking hero & alter-ego. Rare is the encounter with such a frank and unflinching voice reporting from life on the edge, and rarer still the humor and compassion that Beagin manages to locate in some of the country's, and the psyche's, darkest corners. This book invaded my dreams, took over my conversation, and otherwise seduced me totally."
— Joshua Ferris, author of Then We Came to the End

"Jen Beagin has one of the freshest voices I've read in years - funny, wise, whip-smart and compassionate. I tore through Pretend I'm Dead with a deep sense of  affection for all of its beautifully flawed characters and their bittersweet lives."
— Jami Attenberg, author of The Middlesteins and All Grown Up

"Pretend I’m Dead is funny, weird, disturbing, and just a touch magical. Mona, our main character, is such fabulous company, even when she wants everyone in her life to leave her alone. Jen Beagin’s novel will stare you down, mesmerize you, and dare you to laugh."
— Annie Hartnett, author of Rabbit Cake

"With her droll humor and hilarious (but also earnest) observations, the 24-year-old narrator of Pretend I’m Dead had us hooked from page one. Mona gets by cleaning houses; in her free time, she hands out clean needles to heroin junkies. She is adrift; a dreamer without the fuel to make her dreams real. Pretend I’m Dead follows Mona as she moves to a new city, through a few relationships. But reciting the plot doesn’t do the book justice. Glide through Mona’s series of bad decisions with her – she’s a good companion."
— Refinery 29, a Best Book of 2018

"Beagin's work has been compared to Denis Johnson, which is high praise indeed, and totally deserved based on this smart, funny, darkly profound debut."
— Nylon

Jen Beagin holds an MFA in creative writing from the University of California, Irvine, and is a recipient of a Whiting Award in fiction. Her first novel Pretend I’m Dead was shortlisted for the Center for Fiction’s First Novel Prize and Vacuum in the Dark was shortlisted for the Bollinger Everyman Wodehouse Prize for comic fiction. She is also the author of Big Swiss. She lives in Hudson, New York.
Loading...
or
Not Currently Available for Direct Purchase