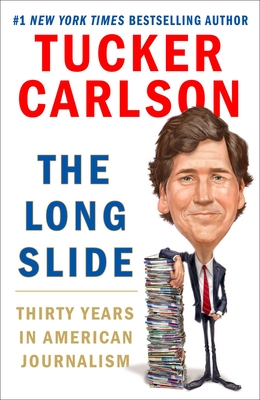 From the host of Tucker Carlson Tonight on Fox News and the New York Times bestselling author of Ship of Fools, a collection of nostalgic writings that underscore America’s long slide from innocence to orthodoxy.

Thirty years ago, Tucker Carlson got his first job out of college fact checking for a quarterly magazine, and he went on to write for many other publications before becoming the primetime Fox News host he is today. In The Long Slide, Tucker delivers a few of his favorite pieces—annotated with new commentary and insight—to memorialize the tolerance and diversity of thought that the media used to celebrate instead of punish. In snapshots spanning the 1990s to today, he’ll take you on a visit to Africa with Al Sharpton and members of the Nation of Islam to stop the civil war in Liberia in 2003, inside the (not-so-) secret armies of Operation Iraqi Freedom, and on the campaign trail with Donald Trump in 2016. In case you missed it the first time around, you’ll also learn about the aesthetic merits of British colonialism, the second shift at a baked bean factory, the unexpected charm of James Carville, and the simple beauty of rural western Maine.

With his signature wit and 20/20 hindsight, Tucker investigates in this patriotic and memorable collection a question on all of our minds: Has America really changed that much in recent decades? The answer is, unequivocally, yes.

Tucker Carlson is the anchor of Tucker Carlson Tonight on the Fox News Channel. He has hosted prime time programs on CNN, PBS, and MSNBC, and cofounded The Daily Caller. He lives in the middle of nowhere with his wife and four children and dogs.