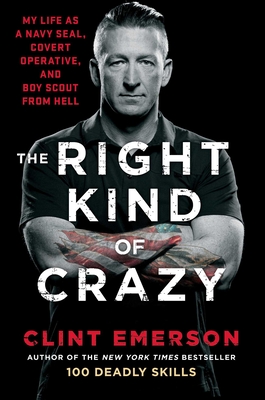 The Right Kind of Crazy (Hardcover)

My Life as a Navy SEAL, Covert Operative, and Boy Scout from Hell

Clint Emerson, retired Navy SEAL and author of the bestselling 100 Deadly Skills, presents an explosive, darkly funny, and often twisted account of being part of an elite team of operatives whose mission was to keep America safe by whatever means necessary.

Clint Emerson is the only SEAL ever inducted into the International Spy Museum. Operating from the shadows, with an instinct for running towards trouble, his unique skill set made him the perfect hybrid operator.

Emerson spent his career on the bleeding edge of intelligence and operations, often specializing in missions that took advantage of subterfuge, improvisation, the best in recon and surveillance tech to combat the changing global battlefield. MacGyvering everyday objects into working spyware was routine, and fellow SEALs referred to his activities simply as “special shit.” His parameters were: find, fix, and finish—and of course, leave no trace.

The Right Kind of Crazy is unlike any military memoir you’ve ever read because Emerson is upfront about the fact that what makes you a great soldier and sometimes hero doesn’t always make you the best guy—but it does make for damn good stories.

Clint Emerson is a recently retired Navy SEAL with twenty years of service with the Special Operations community. He spent his military career serving under various Naval Special Warfare Commands as a Special Operator (SEAL). Emerson is the founder of Escape the Wolf, LLC, which focuses on crisis management for global companies both small and large. He’s the bestselling author of 100 Deadly Skills and 100 Deadly Skills: Survival Edition, and also the only SEAL ever inducted into the International Spy Museum.

Praise For The Right Kind of Crazy: My Life as a Navy SEAL, Covert Operative, and Boy Scout from Hell…

“You have to be a bit crazy to be a SEAL…Clint Emerson takes us on a roller-coaster ride through his career as he demonstrates the ‘the kind’ of craziness that’s required. Buckle your seat belt and be prepared…Clint doesn’t mince words or suffer fools kindly, and cares even less about being politically correct.”—H. Keith Melton, author of Ultimate Spy

“A riveting look inside the inner workings of the SEAL team culture. This is not your ordinary memoir—it’s a fast-paced and hilarious real-life glimpse into what career frogmen experience. A must-read, instant classic.” —Mike Ritland, former Navy SEAL and host of Mike Drop podcast

“Emerson’s book is a must-read. After rebellious years as a youth, he persevered to become a U.S. Navy SEAL. His journey reads like fiction, but it’s satisfying nonfiction narrative of a credible operator…Doing the gritty work of a SEAL in combat zones, Emerson refined the art and tradecraft of sensitive operations elsewhere in the Middle East—a euphemism for high-risk, quiet operational work—in the shadows.” —Chris Costa, Executive Director, International Spy Museum; Deputy Commander, SMU; former Special Assistant to the President for Counterterrorism
or
Buy Here
Copyright © 2020 American Booksellers Association