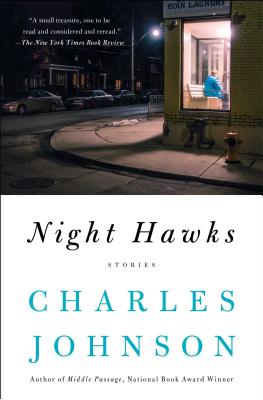 From National Book Award winner Charles Johnson, “the celebrated novelist, short story writer, screenwriter, and essayist…comes a small treasure, one to be read and considered and reread” (The New York Times Book Review), showcasing his incredible range and resonant voice.

Charles Johnson’s Night Hawks presents an eclectic, masterful collection of stories tied together by Buddhist themes and displaying all the grace, heart, and insight for which he has long been known. Spanning genres from science fiction to realism, “Johnson’s writing, filled with the sort of long, layered sentences you can get happily lost in, conveys a kindness; a sense that all of us…have our own stories” (The Seattle Times).

In “The Weave,” Ieesha and her boyfriend carry out a heist at the salon from which she has just been fired—coming away with thousands of dollars of merchandise in the form of hair extensions. “Night Hawks,” the titular story, draws on Johnson’s friendship with the late playwright August Wilson to construct a narrative about two writers who meet at night to talk. In “Kamadhatu,” a lonely Japanese abbot has his quiet world upended by a visit from a black American Buddhist whose presence pushes him toward the awakening he has long found elusive. “Occupying Arthur Whitfield,” about a cab driver who decides to rob the home of a wealthy passenger, reminds readers to be grateful for what they have. And “The Night Belongs to Phoenix Jones” combines the real-life story of a “superhero” in the city of Seattle with an invented narrative about an aging English professor who decides to join him.

With precise, elegant, and moving language, Johnson creates an “arresting” array of “indelible moments that show Johnson to be a master of the short form” (Library Journal, starred review). Night Hawks is “a masterpiece…[that] ultimately offers a message of empowerment and hope” (Oprah.com).

"Johnson, the celebrated novelist, short story writer, screenwriter and essayist, here combines a finely tuned sense of humor with a desire to probe questions that lie at the heart of a reflective existence ... His book is a small treasure, one to be read and considered and reread."
—New York Times Book Review

"Johnson’s writing, filled with the sort of long, layered sentences you can get happily lost in, conveys a kindness; a sense that all of us (particularly in “Occupying Arthur Whitfield” and “Welcome to Wedgwood”) have our own stories."
—Seattle Times

"Best known for his masterful novels and essays, Johnson wrote this rare story collection over a period of 13 years—resulting in a masterpiece ... Unflinching in his observations, Johnson ultimately offers a message of empowerment and hope."
—Oprah.com

"Arresting .. these are indelible moments that show Johnson to be a master of the short form. Highly recommended."
—Library Journal, starred

"These striking stories from National Book Award–winner Johnson (Middle Passage) span a wide range of time periods and cultures but are woven together with a subtle thread of compassion."
—Publishers Weekly