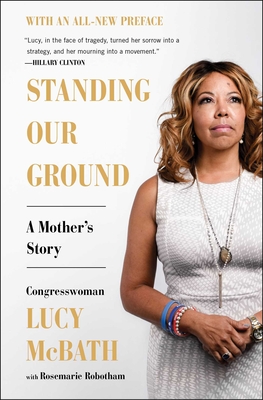 From the national spokesperson for Everytown for Gun Safety and a mother who “turned her sorrow into a strategy and her mourning into a movement” (Hillary Clinton) comes the riveting memoir of a mother’s loss and call to action for common-sense gun laws.

Lucia Kay McBath knew deep down that a bullet could one day take her son. After all, she had watched the news of countless unarmed black men unjustly gunned down.

Standing Our Ground is McBath’s moving memoir of raising, loving, and losing her son to gun violence, and the story of how she transformed her pain into activism. After seventeen-year-old Jordan Davis was shot by a man who thought the music playing on his car stereo was too loud, the nation grieved yet again for the unnecessary loss of life. Here, McBath goes beyond the timeline and the assailant’s defense—Stand Your Ground—to present an emotional account of her fervent fight for justice, and her awakening to a cause that will drive the rest of her days.

But more than McBath’s story or that of her son, Standing Our Ground keenly observes the social and political evolution of America’s gun culture. A must-read for anyone concerned with gun safety in America, it is a powerful and heartfelt call to action for common-sense gun legislation.

Lucia Kay McBath is the national spokesperson and faith and outreach leader for Everytown for Gun Safety and Moms Demand Action for Gun Sense in America. McBath lobbies congressional and state legislators to enact sensible gun laws and supports political candidates for gun reform. She is now taking her work a step further and running for Congress in Georgia’s 6th District race. She is regularly interviewed on national television, sits on panels, and delivers keynotes.

Rosemarie Robotham is a writer, editor, and literary collaborator. She started her journalism career traveling the globe as a reporter and writer for the monthly Life, and later served as a senior editor at Simon & Schuster, and as the deputy editor of Essence magazine, where her stories won numerous awards. The coauthor of the award-winning Spirits of the Passage: The Transatlantic Slave Trade in the Seventeenth Century, she is the author of Jamaica Dreams, a memoir, Zachary’s Wings, a novel, and two collections of fiction and memoir, Mending the World and The Bluelight Corner.
or support indie stores by buying on
Copyright © 2020 American Booksellers Association