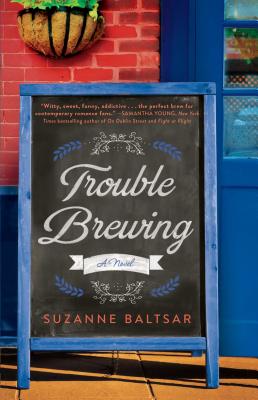 This sweet, savory, and satisfying novel—perfect for fans of The Coincidence of Coconut Cake by Amy Reichert—follows a smart, ambitious woman making her way in the male-dominated world of beer brewing.

Piper Williams is used to being the only woman in a room full of men, but she isn’t used to being instantly drawn to someone she’s in business with.

After working long hours brewing in her garage, Piper is determined to prove herself—and to ignore the chemistry she has with Blake Reed, owner of Minnesota’s newest gastropub who is going to stock four of her brews. She wants her craft beer to stand on its own merits and knows that the tight-knit male-dominated brewer community will assume the worst if she starts anything with one of her vendors. No way she’ll risk everything she’s invested in her budding business on a guy who might not stick—no matter how charmingly handsome and funny he is, right?

And Blake has a conflict of his own—his haughty family wants him to ditch the gastropub and support his father’s political campaign. Well, that, and the fact that he knows Piper’s snark and sass is the perfect blend of crisp and refreshing for him. So Blake and Piper make a pact: she’ll go out with him if, and only if, two additional pubs start carrying her beer. Sticking to the pact proves harder than either of them expected—especially since the attraction is off the charts between quirky, independent Piper and smart, charming Blake.

Then Piper gets a once-in-a-lifetime offer that could launch her company to the next level—and take her away from Blake. Are she and Blake just drunk in love, or do they have something real that’s worth risking her dreams for?

"Come for the swoons, but stay for the female empowerment. Disguised as a charming rom-com, TROUBLE BREWING smashes the beer-bottle ceiling with a glimpse into the male-dominated craft brewing world. You’ll cheer for Piper as she brews her way to success."
— —Amy E. Reichert, author of THE OPTIMIST’S GUIDE TO LETTING GO and THE COINCIDENCE OF COCONUT CAKE

“Funny and full of great characters, Baltsar's debut seems primed to launch a series pairing up other beer-adjacent people in the book.”
— --Booklist

"Trouble Brewing is a classic, feel-good love story. It’s a quick read and a page turner, thanks to the likable characters and Piper’s inspiring determination."
— Minnesota Monthly

“A sweet love story...Blake and Piper had me swooning and smiling!”
— --First For Women

Suzanne Baltsar writes romance novels, manages a small cinema, and has her own film company, for which she wrote and directed a narrative feature in 2014. She writes and lives her happily ever afters in Pennsylvania with a Mr. Brawny look-a-like and a couple of children, some furry, some not.
Loading...
or
Not Currently Available for Direct Purchase