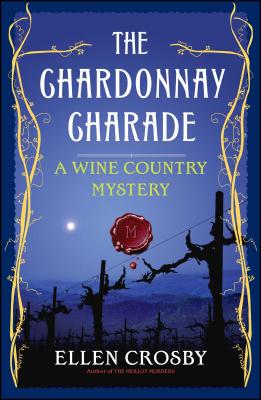 The Chardonnay Charade begins with a daring helicopter flight in the middle of the night. Facing a freak spring frost that threatens to kill the grapes in her vineyard, Lucie Montgomery hires a chopper to fly over the vines in order to blow warm air on them. But her thoughts soon turn from grapes to murder when she discovers the body of Georgia Greenwood, a controversial political candidate, lying near the fields. Georgia's husband, Ross, Lucie's friend and doctor, immediately falls under suspicion. To make matters worse, Ross, a renowned collector of Civil War documents, has just discovered a letter that seems to prove that Confederate president Jefferson Davis had prior knowledge of the plot to assassinate Abraham Lincoln. In the small town of Atoka, Virginia -- proud home to the "Gray Ghost," the Confederacy's legendary guerrilla commander -- the letter is a bombshell.

Three years ago Ross saved Lucie's life after she was involved in a near-fatal car crash. Now she intends to return the favor and prove Ross's innocence. As the search for Georgia's killer escalates, Lucie crosses swords with her attractive but cantankerous winemaker, Quinn Santori, and confronts her own unwelcome feelings of jealousy over his new romance and job prospects. Her worries about her kid sister's out-of-control drinking and a second vineyard-related death further ratchet up the tension. Even though Lucie believes that in vino veritas -- in wine there is truth -- she finds that the path to uncovering a murderer involves making a heartbreaking decision that will alter the lives of those she loves.