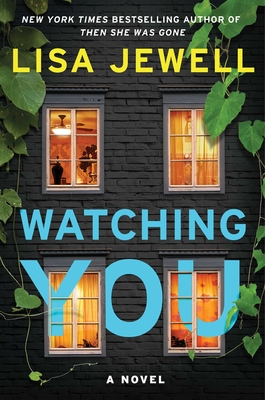 In Lisa Jewell’s latest brilliant “bone-chilling suspense” (People) no one is who they seem—and everyone is hiding something. Who has been murdered—and who would have wanted one of their neighbors dead? As “Jewell teases out her twisty plot at just the right pace” (Booklist, starred review), you will be kept guessing until the startling revelation on the very last page.

Praise For Watching You: A Novel…

Praise for Watching You:

“A twisty British mystery...Brace yourself as Jewell stacks up the secrets, then lights a long, slow fuse.”
— People

“Page one intrigued me. Page three hooked me. By page five, I was consumed. This compulsive, propulsive novel is both a seize-you-by-the-throat thriller and a genuinely moving family drama. Stellar.”
— A.J. Finn, #1 New York Times bestselling author of The Woman in the Window

"Big Little Lies-esque small town drama with stakes as high as Amy from Gone Girl's IQ, Lisa Jewell's latest thriller is not to be missed."
— InStyle

"Watching You takes the idea of obsession to chilling heights."
— PopSugar

"This suspense is going to have you turning the pages all night long."
— Bustle

"Stellar domestic drama...Expert misdirection keeps the reader guessing, and the rug-pulled-out-from-beneath-your-feet conclusion—coupled with one final, bonechilling revelation—is stunning. Best not to bet on anyone. A compulsive read guaranteed to please fans of A. J. Finn and Ruth Ware."
— Booklist (starred review)

“[A] crafty conundrum…the author smoothly juggles multiple story lines…prepare to be blindsided by the murder victim’s identity, not revealed until late in the game—and an even more stunning final surprise. Jewell does a masterly job of maintaining suspense.”
— Publishers Weekly

“Jewell adeptly weaves together a complex array of characters in her latest thriller. The novel opens with the murder investigation and deftly maintains its intensity and brisk pace...Jewell's use of third-person narration allows her to explore each family's anxieties and sorrows, which ultimately makes this novel's ending all the more unsettling. An engrossing and haunting psychological thriller.”
— Kirkus Reviews

"A master at unspooling tightly told tales, Jewell specializes in perfectly-pitched thrillers without sacrificing a drop of her characters’ complexities, secrets, and desires, and this latest one is no exception."
— The Seattle Review of Books

"Jewell excels in creating complex characters, building tension and keeping readers in the dark yet riveted until the "Aha!" moments...this thriller unfolds and concludes in a very satisfying way."
— Shelf Awareness

"In her latest mystery, bestselling author Lisa Jewell combines the cloistered charm of a small English village with the curiosity, paranoia and nosy fatalism of Rear Window. Then comes a dose of lust and lies and the sinister pursuit of Fatal Attraction. It’s a thrilling trifecta...With 16 novels to her credit and more twists up her sleeve than a master magician, Jewell is sure to keep you up at night."
— Minneapolis Star Tribune

Lisa Jewell is the #1 New York Times bestselling author of nineteen novels, including The Family Upstairs and Then She Was Gone, as well as Invisible Girl and Watching You. Her novels have sold over 10 million copies internationally, and her work has also been translated into twenty-nine languages. Connect with her on Twitter @LisaJewellUK, on Instagram @LisaJewellUK, and on Facebook @LisaJewellOfficial.
Loading...
or support indie stores by buying on