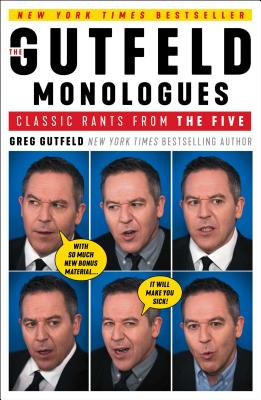 Classic Rants from the Five

A dynamic and annotated collection of Fox News star and New York Times bestselling author Greg Gutfeld’s sharp, hilarious monologues on everything from politics to pop culture—updated with new commentary for the current day.

“Wherever I go, I am hit repeatedly by the same question: where can I read your monologues? It should be easy to find these little nuggets of knowledge.”

In the past few years, Fox News host Greg Gutfeld has covered everything from crazed academics, to unhinged celebrities, to the wildest election in recent history on his shows The Five and The Greg Gutfeld Show. In The Gutfeld Monologues, he brings together his best and favorite monologues in this funny, unconventional collection for new and longtime fans alike. Scored through with marginal edits, scratch-outs, 20/20 hindsight, and up-to-the-minute commentary on what he got wrong, this book isn’t your grandmother’s anthology collection.

With his signature humor, wit, and insight, Greg explains it all in this memorable collection about some of our country’s most crucial—and not so crucial—modern moments.

Praise For The Gutfeld Monologues: Classic Rants from the Five…

"Greg Gutfeld's monologues are actually more like dialogues: a funny, smart, sometimes crackpot conversation among the many Gregs--the punk rock Greg, the Fox News Greg, the gimlet-eyed Observer Greg, and even the Hipster Libertarian Greg. All of the Gregs are here in the book, in hilarious form, and I'm still laughing in awe."
— —Rob Long

“I’ve watched every one of Gutfeld’s monologues live, and I still can’t wait to read them. They’re that good.”
— —Tucker Carlson

"If Mark Twain were alive today, he would be the oldest man in the world-- but he would also be, I'm convinced, a Gutfeld fan."
— —Walter Kirn, New York Times bestselling author of Up in the Air

"Greg Gutfeld is both smart and funny. That's a dangerous combo."
— —King Buzzo, The Melvins

Greg Gutfeld is a New York Times bestselling author, satirist, humorist, and magazine editor. He is the host of The Greg Gutfeld Show and cohost of The Five on Fox News. Prior to joining Fox, Gutfeld was editor of Men’s Health magazine. He later became editor of Stuff, helmed Maxim magazine in the United Kingdom, and was host of the legendary cult TV phenomenon Red Eye. Gutfeld lives in New York City with his wife. Follow Greg on Twitter @GregGutfeld, Facebook @GGutfeld, and Instagram @RealGregGutfeld.
Loading...
or support indie stores by buying on