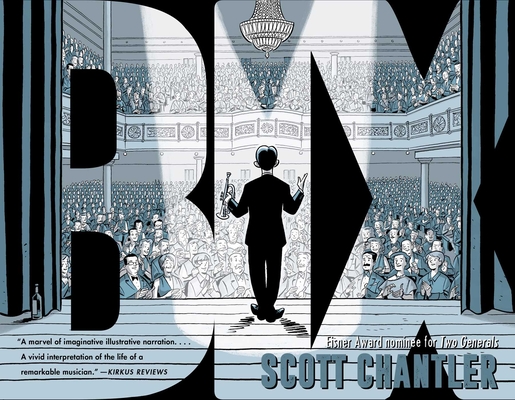 Told in stunning illustrations, Bix is a near-wordless graphic exploration highlighting the career of Leon Bix Beiderbecke, one of the most innovative jazz soloists of the 1920s next to the legendary Louis Armstrong. While composing and recording some of the landmark music in the early history of genre, Bix struggled with personal demons, facing the disapproval of his conservative parents and an increasing dependence on alcohol. Presented in predominantly silent panels to reflect his rebellious outsider quality and inability to communicate in anything other than his own musical terms, Bix tells the story of a music star’s rapid rise and tragic fall—a metaphor for the glories and risks inherent in the creative life.

PRAISE FOR SCOTT CHANTLER AND BIX:

“We’re accustomed to seeing beautiful work by award-winning cartoonist Scott Chantler, but this book is particularly special….There’s minimal dialogue, and its expressive, silent art, all oriented horizontally, tells the story…..Chantler…varies the number of panels per page, the page layouts and the content of each panel, to pull off the trick perfectly. And it reflects the mood of the story. Frenetic scenes of dancing through the Jazz Age are crowded, while sad moments…are in sparse, measured arrangements. This book’s a gem, and so is Chantler.” —Toronto Star

“A marvel of imaginative illustrated narration….A vivid interpretation of the life of a remarkable musician.” —Kirkus Reviews

“Eisner-nominated Chantler utilizes the deliberate cadence of panels alternating with layered multipanel visual bursts to denote musicality and the excitement of life in this nearly worldless graphic biography, a daring and bold experiment that stunningly succeeds.” —Library Journal (starred review)

“Somehow Scott manages to up his game with each new volume." —Chris Samnee

“[Chantler's] Two Generals should be given to all prospective cartoonists as a tutorial on how to visually tell tales.” —Jamie S. Rich

“Chantler is a talent not to be ignored.” —The A.V. Club

Scott Chantler is the acclaimed creator of the graphic novels Two Generals, Northwest Passage, and the Three Thieves series, which won a Joe Shuster Award. He has also been nominated for five Eisner Awards, two Harvey Awards, and a Doug Wright Award. Find out more at ScottChantler.com.
Loading...
or
Not Currently Available for Direct Purchase