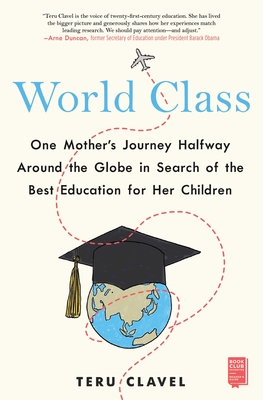 “An intriguing volume on the differences in global education.” —Library Journal

A must-read firsthand exploration of why Asian students are outpacing their American counterparts and how to help our children excel in today’s competitive world.

When Teru Clavel had young children, she watched her friends and fellow parents vie for spots in elite New York City schools. Instead of losing herself in the intensive applications and interview process, Teru and her family moved to Asia, embarking on a decade-long journey through the public schools of Hong Kong, Shanghai, and Tokyo.

These schools were low-tech and bare-bones, with teachers who demanded obedience and order. In Hong Kong, her children’s school was nicknamed The Prison for its foreboding facilities, yet her three-year-old loved his teachers and his nightly homework. In Tokyo, the students were responsible for school chores, like preparing and serving school lunches.

Yet Teru was amazed to discover that her children thrived in these academically competitive cultures; they learned to be independent, self-confident, resilient, and, above all, they developed a deep love of learning. When the family returned to the States, the true culture shock came when the top schools could no longer keep up with her children.

Written with warmth and humor, World Class is a compelling story about how to inspire children to thrive academically. “Studded with lists of useful tips about choosing schools and hiring tutors, for parents who must advocate for their children and supplement gaps in their educations” (Publishers Weekly) and an insightful guide to set your children on a path towards lifelong success.

Praise For World Class: One Mother's Journey Halfway Around the Globe in Search of the Best Education for Her Children…

“Teru Clavel questions and challenges the educational system, and moves her family around the globe for over a decade to redefine and reassess what education means to them. This book changed me. It’s a must read.”
— Angela C. Santomero, author of Radical Kindness and creator of Daniel Tiger's Neighborhood

“Teru Clavel is the voice of twenty-first century education. She has lived the bigger picture and generously shares how her experiences match leading research. We should pay attention—and adjust.”
— Arne Duncan, former Secretary of Education under President Barack Obama

“Teru’s personal experiences abroad with her children breathe life into the data and research compiled over many years by the Organization for Economic Co-operation and Development (OECD). This is a wakeup call for families, policy-makers and educational institutions.”
— Andreas Schleicher, director for education and skills at the OECD

“Look no further. This is an indispensable guide for parents who are seeking insight into a myriad of education strategies around the world. The international comparisons and well-researched strategies were eye-opening to me as a parent of four.”
— U.S. Senator Richard Blumenthal

“World Class captures the central importance of community and equity within educational systems. Teru’s journey brings best practices from around the world and places them inside American homes and schools. It is time to accept the competitive nature of our global economy and adapt accordingly for our future collective security.”
— Nick Melvoin, board member of the Los Angeles Unified School District

“A thoughtful combination memoir and manual . . . [Clavel’s] personal narrative is studded with lists of useful tips about choosing schools and hiring tutors, for parents who must advocate for their children and supplement gaps in their educations.”
— Publishers Weekly

“An intriguing volume on the differences in global education.”
— Library Journal

Teru Clavel is a comparative education expert, author, and speaker who has shared her insights on education and globalization on Fareed Zakaria’s GPS, Today, CBS This Morning, CNBC’s Squawk Box, and Channel NewsAsia. She has written columns for and has been featured and cited in The Times (London), Chicago Tribune, The Japan Times, the Financial Times, The Washington Post, and numerous other publications. Teru holds degrees in Global and Comparative International Education as well as Asian Studies. She spent over a decade as an education journalist and college consultant while raising her three children in the public schools of Hong Kong, Shanghai, Tokyo, and California. Teru recently returned with her family to her hometown, New York City. She can be found on social media at @TeruClavel.
Loading...
or support indie stores by buying on