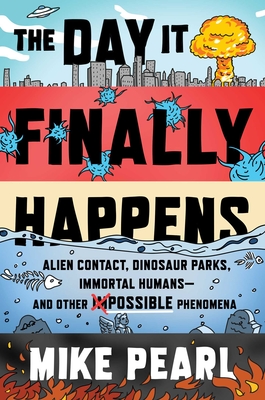 The Day It Finally Happens

From a Vice magazine columnist whose beat is “the future,” here is entertaining speculation featuring both authoritative research and a bit of mischief: a look at how humanity is likely to weather such happenings as the day nuclear war occurs, the day the global internet goes down, the day we run out of effective antibiotics, and the day immortality is achieved.

If you live on planet Earth you’re probably scared of the future. How could you not be? Some of the world’s most stable democracies are looking pretty shaky. Technology is invading personal relationships and taking over jobs. Relations among the three superpowers—the US, China, and Russia—are growing more complicated and dangerous. A person watching the news has to wonder: is it safe to go out there or not?

Taking inspiration from his virally popular Vice column “How Scared Should I Be?,” Mike Pearl in The Day It Finally Happens games out many of the “could it really happen?” scenarios we’ve all speculated about, assigning a probability rating, and taking us through how it would unfold. He explores what would likely occur in dozens of possible scenarios—among them the final failure of antibiotics, the loss of the world’s marine life, a complete ban on guns in the US, and even the arrival of aliens—and reports back from the future, providing a clear picture of how the world would look, feel, and even smell in each of these instances.

For fans of such bestsellers as What If? and The Worst Case Scenario Survival Handbook, The Day It Finally Happens is about taking future events that we don’t really understand and getting to know them in close detail. Pearl makes science accessible and is a unique form of existential therapy, offering practical answers to some of our most worrisome questions. Thankfully, the odds of humanity’s pulling through look pretty good.

"The Day It Finally Happens is unlike anything I’ve ever read. It’s a bit like losing yourself in a thrumming kaleidoscope of our favorite hypothetical futures, which range from looming hellscapes to our most durable dreams—but you’ll be surprisingly well-informed when you finally come to in the present. Sharp, comic, blunt, and justifiably anxious, Pearl is the ideal tour guide to what lies ahead. You’ll probably find yourself, as I did, flipping to the next scenario, and the next, long past any sane hour of the night. Pearl's investigations into the worlds of tomorrow are never anything less than engrossing.”
—Brian Merchant, nationally bestselling author of The One Device: The Secret History of the iPhone

"Brilliantly anxiety affirming... Thanks to Mike Pearl, I can now claim my constant feeling of dread is based on expert interviews and careful scientific research."
—Zach Weinersmith, coauthor of Soonish: Ten Emerging Technologies That’ll Improve and/or Ruin Everything

“The Day It Finally Happens got my brain buzzing with stories that bring together fantasy and reality. The well-researched speculations induce daydreams and nightmares and mark Mike Pearl as one of his generation’s most interesting writers.”
—Alec Ross, New York Times bestselling author of The Industries of the Future

“A deeply entertaining—if occasionally horrifying—imagining of a world where the unlikely has become the reality.”
—Joshua Piven, coauthor of international bestseller The Worst-Case Scenario Survival Handbook

“In his fascinating book The Day It Finally Happens journalist Mike Pearl, who admits almost gleefully that he suffers from generalized anxiety disorder and extended stretches of panic, imagines the future and is shocked by what he foresees. Think Woody Allen meets Alvin Toffler. Just as Toffler’s Future Shock set a standard for crystal ball gazing decades ago, Pearl’s mighty oak of a book gives us a sobering, and at times humorous, assessment of what’s on today’s horizon. When you present a litany of dire statistics, as Pearl often does, it’s wise to preserve a sense of humor. Pearl has that in abundance. He’s a funny guy, but with a serious side. I came away from The Day It Finally Happens bubbling with new information, and hopeful—but not certain—of a better future.”
—Charles Panati, former science editor of Newsweek and author of Panati’s Extraordinary Endings of Practically Everything and Everybody

"Alternately reassuring and hair-raising, The Day It Finally Happens uncovers surprising answers to all those ‘What if?’ questions that keep us up at night. It’s like peering through a crack in time at what lies ahead and feeling yourself unable to take your eyes away. Trust Mike Pearl to be your intrepid guide to the future.”
—David Feldman, author of Why Do Clocks Run Clockwise? and Why Do Fish Sleep?

“I was floored by the detail in this survey of looming doom. Whether you intend to survive the cataclysm or merely drown passively in a tsunami of fire you should be versed in every one of these scenarios. Remember to keep a small bag packed!”
—John Roderick, host of the Omnibus Project Podcast, an apocalypse primer

Mike Pearl is a Webby Award–winning journalist whose writing has appeared in The Awl, The Hollywood Reporter, Grist, and Death and Taxes, and his columns “How Scared Should I Be?,” “Climate 2050 Predictions,” and “Hours and Minutes” have been featured in VICE. A graduate of Chapman University, he is based in Los Angeles, California. The Day It Finally Happens is his first book.
Loading...
or support indie stores by buying on