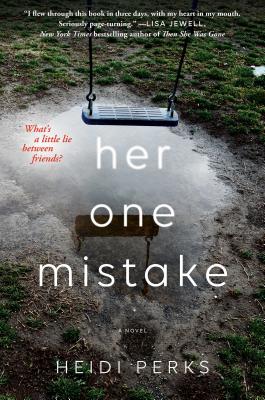 What should have been a fun-filled, carefree day takes a tragic turn for the worse for one mother when her best friend’s child goes missing in this suspenseful, compulsively readable, and darkly twisted psychological thriller.

It all started at the school fair…

Charlotte was supposed to be looking after the children, and she swears she was. She only took her eyes off of them for one second. But when her three kids are all safe and sound at the school fair, and Alice, her best friend Harriet’s daughter, is nowhere to be found, Charlotte panics. Frantically searching everywhere, Charlotte knows she must find the courage to tell Harriet that her beloved only child is missing. And admit that she has only herself to blame.

Harriet, devastated by this unthinkable, unbearable loss, can no longer bring herself to speak to Charlotte again, much less trust her. Now more isolated than ever and struggling to keep her marriage afloat, Harriet believes nothing and no one. But as the police bear down on both women trying to piece together the puzzle of what happened to this little girl, dark secrets begin to surface—and Harriet discovers that confiding in Charlotte again may be the only thing that will reunite her with her daughter....

This breathless and fast-paced debut—perfect for fans of Big Little Lies and The Couple Next Door—takes you on a chilling journey that will keep you guessing until the very last page.

Praise For Her One Mistake…

“I flew through this book in three days, with my heart in my mouth. Seriously page turning.”
— —Lisa Jewell, New York Times bestselling author of Then She Was Gone

"I flew through this book, desperate to unravel the secrets within. A chilling, captivating story of friendship, motherhood, and deceit, HER ONE MISTAKE kept me guessing until the very end."
— —Megan Miranda, New York Times bestselling author of All the Missing Girls

“A terrifically suspenseful and intriguing novel that hooked this reader from beginning to end.”
— —Liz Nugent, international bestselling author of Unraveling Oliver

"Her One Mistake is a breathtaking, bone-chilling work of psychological suspense. An outstanding debut that had me guessing right up to the very end."
— —Cristina Alger, USA Today bestselling author of The Banker’s Wife

“[This] domestic suspense debut is sure to be a hit…Once the pace takes off, the twists come fast. Perks is an author to watch, and this examination of true female friendship will appeal to many.”
— --Booklist

"Perks lays down a major twist halfway through, but the book is also a clever, thoughtful study of the fraught power dynamics between women — as well as the people they love (and, sometimes, fear)."
— --Entertainment Weekly

"In the vein of Big Little Lies, Heidi Perks's latest thriller gives domesticity a biting edge when a mother's only daughter goes missing, vanishing under the watchful eye of her best friend Charlotte."
— --InStyle

"...this psychological thriller is one you can't afford to miss."
— --Popsugar

"The narrative is full of twists and turns...the ending is shocking and totally unexpected."
— --New York Journal of Books

"This disturbing, engrossing novel will leave you holding your breath until the very end."
— Buzzfeed

Heidi Perks was born and raised in the seaside town of Bournemouth on the south coast of England. After moving up to London for a short stint, she has since moved back to Bournemouth where she now lives with her husband and two children. Heidi has been writing since she was small, though for too many years her day time job and career in marketing got in the way. Now she writes full time and cannot think of anything she would rather be doing.
Loading...
or
Not Currently Available for Direct Purchase