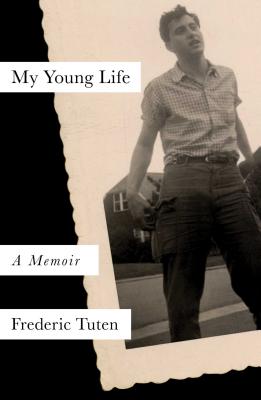 Novelist, essayist, and critic Frederic Tuten recalls his personal and artistic coming-of-age in 1950s New York, a defining period that would set him on the course to becoming a writer.

Born in the Bronx to a Sicilian mother and Southern father, Frederic Tuten always dreamed of being an artist. Determined to trade his neighborhood streets for the romantic avenues of Paris, he learned to paint and draw, falling in love with the process of putting a brush to canvas, and the feeling it gave him. At fifteen, he decided to leave high school and pursue the bohemian life he’d read about in books, a life of salons and cafes and “worldly women” from whom he could learn and grow. But, before he could, he would receive an extraordinary education, right in his own backyard.

My Young Life is the story of those early formative years where, in the halls of Christopher Columbus High School, and later the City College of New York, Frederic would discover the kind of life he wanted to lead. As Tuten travels downtown for classes at the Art Students League, spends afternoons reading in Union Square, and discovers the vibrant scenes of downtown galleries and Lower East Side bars, he finds himself a member of a new community of artists, gathering friends, influences—and many girlfriends—along the way.

Frederic Tuten has had a remarkable life, writing books, traveling around the world, acting in and creating films, and even conducting summer workshops with Paul Bowles in Tangiers. Spanning two decades and bringing us from his family’s kitchen table in the Bronx and the cafes of Greenwich Village and back again, My Young Life is an intimate and enchanting portrait of an artist’s coming-of-age, set against one of the most exciting creative periods of our time.

Frederic Tuten is the author of five novels and My Young Life, a memoir. His short stories, art, and film criticism have appeared in such places as Artforum, The New York Times, Vogue, Granta, and Harper’s Magazine. Tuten is the recipient of a Guggenheim Fellowship for Fiction and the Award for Distinguished Writing from the American Academy of Arts and Letters.

Praise For My Young Life…

Praise for My Young Life:

"Frederic Tuten has written a sweet, openhearted, guileless, and deeply moving account of his formative years, one that will resonate with anyone who has undergone the process of trying to become an artist. He somehow manages to merge the young and older Frederics so that both are speaking at once, which is quite a feat." — Luc Sante

"Tuten’s memoir of growing up in the Bronx is passionate and rueful, and at times, hilarious. His bold, unabashed prose rushes beautifully through the decades. A naïf with attitude, Tuten’s younger self is a hopeless romantic, an impoverished dreamer who conflates his desire to be an artist with his yearning for love. He idealizes art and women in equal measure, failing at one but succeeding spectacularly at the other. A burning tale of the long journey from Arthur Avenue to the world of art and artists in Alphabet City.” — David Salle

Like Tuten himself, MY YOUNG LIFE has an enormous heart. It's the story of a young man in love with art, with New York, and with just about every person who crosses his path. MY YOUNG LIFE is an antidote to this cool, anxious century: a reminder that we can feel the most overpowering feelings, and dream the most dizzying dreams. —Paul LaFarge

"Sensational. So clearly and movingly written—its sentences so funny and quirky and matter-of-factly Steinian—its tone as lucid as James Baldwin's (in "Notes") or Delmore Schwartz (in "In Dreams") or Willa Cather's or Jean Rhys's. A straightforward shaped American (or French-American) tone. (The best American writing—such as yours—is mostly French in its leanness and succulence.) The feelings behind the words are so full and rich and (I daresay) pregnant with meaning, that the language therefore needs to do nothing fancy; it can simply be itself. A stylistic (and visionary) pinnacle." —Wayne Koestenbaum

"The memoir got into my head in a very deep way, and for many nights I had dreams that it provoked. What the book seems to be about (and this is what made it so moving and disturbing) is the sadness of getting what you want. You (or "you") begin by wanting art and sex and you get more sex than you hoped for or imagined, but it leaves you just as lonely as you began. The chance to make art is something hinted at all along and the ending of the book is a wonderfully somersaulting marvel." —Edward Mendelson

"So thrilling. My Young Life describes a specific period, but it also evokes the timeless fascination with the Romantic life. I don’t think I've ever read a book so precise in presenting a young man's preoccupation and occupation." —Steve Martin
or
Buy Here
Copyright © 2020 American Booksellers Association