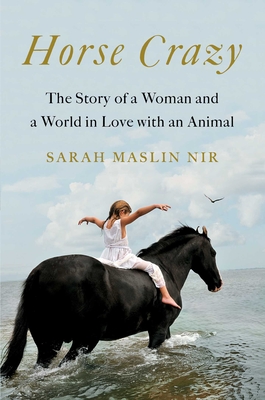 In the bestselling tradition of works by such authors as Susan Orlean and Mary Roach, a New York Times reporter and Pulitzer Prize finalist explores why so many people—including herself—are obsessed with horses.

It may surprise you to learn that there are over seven million horses in America—even more than when they were the only means of transportation—and nearly two million horse owners. Acclaimed journalist and avid equestrian Sarah Maslin Nir is one of them; she began riding horses when she was just two years old and hasn’t stopped since. Horse Crazy is a fascinating, funny, and moving love letter to these graceful animals and the people who—like her—are obsessed with them. It is also a coming-of-age story of Nir growing up an outsider within the world’s most elite inner circles, and finding her true north in horses.

Nir takes readers into the lesser-known corners of the riding world and profiles some of its most captivating figures. We meet Monty Roberts, the California trainer whose prowess earned him the nickname “the man who listens to horses,” and his pet deer; George and Ann Blair, who at their riding academy on a tiny island in Manhattan’s Harlem River seek to resurrect the erased legacy of the African American cowboy; and Francesca Kelly, whose love for an Indian nobleman shaped her life’s mission: to protect an endangered Indian breed of horse and bring them to America.

Woven into these compelling character studies, Nir shares her own moving personal narrative. She details her father’s harrowing tale of surviving the Holocaust, and describes an enchanted but deeply lonely upbringing in Manhattan, where horses became her family. She found them even in the middle of the city, in a stable disguised in an old townhouse and in Central Park, when she chased down truants as an auxiliary mounted patrol officer. And she speaks candidly of how horses have helped her overcome heartbreak and loss.

Infused with heart and wit, and with each chapter named after a horse Nir has loved, Horse Crazy is an unforgettable blend of beautifully written memoir and first-rate reporting.

Praise For Horse Crazy: The Story of a Woman and a World in Love with an Animal…

"Lyrical, lovely, and thoroughly engaging, Horse Crazy is that rare book that looks inward and outward. It harnesses Nir's smart reporting about the world of equine devotion with a reflection on her lifelong love of horses, and the result is wonderful." —Susan Orlean, New York Times bestselling author of The Library Book

"Sarah Maslin Nir has given us a beautifully written book about horses and family and the remarkable people she has met who share her passion for life as well as for equines. It is a story of terrible loss and incredible resilience with Nir’s great skill guiding us along her journey."—Susan Richards, New York Times bestselling author of Chosen by a Horse

"A lifetime with horses has done nothing to dull the wonder they evoke in Sarah Maslin Nir, and she's done us all a favor by translating her obsession into this clear-eyed, love-filled book. Beyond telling her own story with horses, she follows her instincts as a reporter into intriguing and overlooked corners of the horseworld, seamlessly connecting the individual animals she has known to the complex history of an ancient and essential species. A transfixing and restorative read."
—Maggie Shipstead, New York Times bestselling author of Seating Arrangements and Astonish Me

"Anyone who has spent a childhood yearning after horses is sure to find this highly readable book an engrossing journey."
—Wendy Williams, New York Times bestselling author of The Horse and The Language of Butterflies

"If you think you know what this book holds, I think you're wrong. It holds horses, yes, and heart and humor and beautiful writing, but also?  A horse show for plastic Breyer horses.  A horse airline (for which Nir takes a shift as flight attendant). A verb for rubbing pepper up a horse's ass to make it step lively. Sarah Maslin Nir weaves reporting and memoir as skillfully as she finesses an equitation course. Blue ribbon!" —Mary Roach, New York Times bestselling author of Grunt: The Curious Science of Humans at War

“Sarah Maslin Nir has struck at the heart of why I love the grace and beauty of horses, my own and those out in the world. She has captured their capacity to heal, nurture, enliven, and connect. She tells her own story and that of so many compelling people through these lovely animals in a way that makes this book about so much more than horses. Her incisive and powerful work as a journalist is on full display here.”—Soledad Obrien, award winning broadcast journalist

"This thoughtful, well-researched book offers a charming portrait of horses in America as well as of a woman who found self-acceptance in their graceful company...A bighearted debut book sure to please horse lovers."—Kirkus Reviews

"[A] funny, fascinating and ultimately moving love letter to one of the world’s most beloved animals."—USA Today

Sarah Maslin Nir is a staff reporter for The New York Times. Nir was a Finalist for the 2016 Pulitzer Prize for “Unvarnished,” her more than yearlong investigation into New York City’s nail salon industry that documented the exploitative labor practices and health issues manicurists face. Before becoming a staff reporter, Nir freelanced for eleven sections of the paper, traveling to the Alaskan wilderness in search of people who prefer to live in isolation, and to post-earthquake Haiti. She began as the New York Times’s nightlife columnist, covering 252 parties in eighteen months, and continued on to a career that has taken her from covering kidnappings by terrorists in Benin, West Africa, to wildfires in California, and everything in between. A born and raised Manhattanite, Nir earned a masters at the Columbia Graduate School of Journalism, and graduated from Columbia University, where she studied politics and philosophy. She is the author of Horse Crazy. She loves horses.
Loading...
or support indie stores by buying on