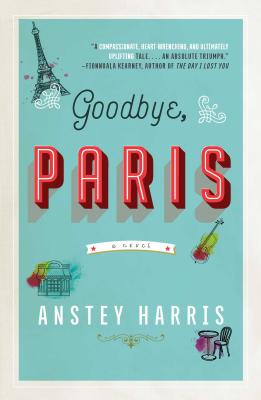 “When Grace’s quiet existence takes an unexpected turn, she is forced to reevaluate her life and reassess who she is and what she is capable of. Goodbye, Paris is a beautifully crafted, bittersweet tale of one woman who feels her world collapse, but with some help from friends picks herself up, dusts herself off, and discovers that she can become her best self. An engrossing and uplifting story that will appeal to readers of Elizabeth Berg, among others.”
— Tova Beiser, Brown University Bookstore, Providence, RI
View the List

A BOOK OF THE MONTH CLUB PICK
AN INDIE NEXT PICK

Jojo Moyes meets Eleanor Oliphant in Goodbye, Paris, an utterly charming novel that proves that sometimes you have to break your heart to make it whole.

Grace once had the beginnings of a promising musical career, but she hasn’t been able to play her cello publicly since a traumatic event at music college years ago. Since then, she’s built a quiet life for herself in her small English village, repairing instruments and nurturing her long- distance affair with David, the man who has helped her rebuild her life even as she puts her dreams of a family on hold until his children are old enough for him to leave his loveless marriage.

But when David saves the life of a woman in the Paris Metro, his resulting fame shines a light onto the real state of the relationship(s) in his life. Shattered, Grace hits rock bottom and abandons everything that has been important to her, including her dream of entering and winning the world’s most important violin-making competition. Her closest friends—a charming elderly violinist with a secret love affair of his own, and her store clerk, a gifted but angst-ridden teenage girl—step in to help, but will their friendship be enough to help her pick up the pieces?

Filled with lovable, quirky characters, this poignant novel explores the realities of relationships and heartbreak and shows that when it comes to love, there’s more than one way to find happiness.

Praise For Goodbye, Paris: A Novel…

"As elegant and uplifting as a classical sonata, with added kick from its unforgettably quirky characters. I was both engrossed in and moved by this fabulous debut."
— Catherine Isaac, author of You Me Everything

Anstey Harris teaches creative writing in Kent, England. Her short stories have been widely published in anthologies and online and she was the winner of the H.G. Wells Short Story Prize in 2015. Anstey lives in Kent, England, and is the mother of singer-songwriter Lucy Spraggan.
Loading...
or
Not Currently Available for Direct Purchase