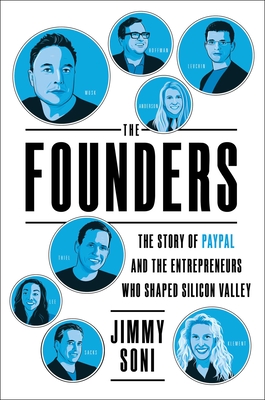 The Story of Paypal and the Entrepreneurs Who Shaped Silicon Valley

A definitive look at the origin of PayPal and its founding team—including Elon Musk, Amy Rowe Klement, Peter Thiel, Julie Anderson, Max Levchin, Reid Hoffman, and many others whose stories have never been shared. They have defined the modern world. This experience defined them.

Today, PayPal’s founders and earliest employees are considered the technology industry’s most powerful network. Since leaving PayPal, they have formed, funded, and advised the leading companies of our era, including Tesla, Facebook, YouTube, SpaceX, Yelp, Palantir, and LinkedIn, among many others. As a group, they have driven twenty-first-century innovation and entrepreneurship. Their names stir passions; they’re as controversial as they are admired.

Yet for all their influence, the story of where they first started has gone largely untold. Before igniting the commercial space race or jumpstarting social media’s rise, they were the unknown creators of a scrappy online payments start-up called PayPal. In building what became one of the world’s foremost companies, they faced bruising competition, internal strife, the emergence of widespread online fraud, and the devastating dot-com bust of the 2000s. Their success was anything but certain.

In The Founders: The Story of PayPal and the Entrepreneurs Who Shaped Silicon Valley, award-winning author and biographer Jimmy Soni explores PayPal’s turbulent early days. With hundreds of interviews and unprecedented access to thousands of pages of internal material, he shows how the seeds of so much of what shapes our world today—fast-scaling digital start-ups, cashless currency concepts, mobile money transfer—were planted two decades ago. He also reveals the stories of countless individuals who were left out of the front-page features and banner headlines but who were central to PayPal’s success.

The Founders is a story of iteration and inventiveness—the products of which have cast a long and powerful shadow over modern life. This narrative illustrates how this rare assemblage of talent came to work together and how their collaboration changed our world forever.

Praise For The Founders: The Story of Paypal and the Entrepreneurs Who Shaped Silicon Valley…

“A masterpiece of reporting and storytelling by a deeply intuitive writer who gained access to the most important—and elusive—minds of our generation. In The Founders, Soni has produced more than just a bona fide business thriller. He has written a book with the power to change how we see the world, and one that reminds us that America’s most beautiful instinct is to embrace original thinkers who are willing to risk everything in the name of innovation. The best book I have read in ages.”
—Robert Kurson, author of Shadow Divers and Rocket Men

“Anyone who has used the internet in the last decade will find The Founders a revealing and sometimes shocking look inside today’s tech revolution and the very human wizards who have transformed our lives—for good and ill.”
—Kati Marton, author of The Chancellor: the Remarkable Odyssey of Angela Merkel

“You may think you know something about the early careers of Elon Musk, Peter Thiel, and Max Levchin, but until you read this extraordinary and meticulously reported book, you really don't. The Founders not only explains the veiled histories and inner workings of Silicon Valley’s influential ‘PayPal Mafia’—it explores the profound questions of how world-changing networks of technology, talent, and innovation come together.”
—Jon Gertner, author of The Idea Factory and The Ice at the End of the World

“This is a fascinating page-turner about the brilliant and competitive innovators who created PayPal and went on to shape our digital world. The colorful cast of characters—including Thiel, Musk, Hoffman, Levchin—is amazing. Deeply reported and bracingly written, this book is an indispensable guide to modern innovation and entrepreneurship.”
—Walter Isaacson, author of Steve Jobs

“The real secrets of Silicon Valley are the tight networks of friendship and business that propel new ideas, companies, and personalities into the world. The most consequential of these networks in recent decades is the one that began at PayPal. Here Jimmy Soni delivers a startup-hustle story for the ages, revealing why their wild entrepreneurial ride did so much to build Silicon Valley’s supersized present.”
—Margaret O’Mara, author of The Code: Silicon Valley and the Remaking of America

“With this book, Soni joins the ranks of Eric Ries and Ben Horowitz as the author of a canonical must-read for all startup founders. Readers will discover not only rich characters, but unflinching and trend-proof insights into what it takes to start a company that changes history.”
—Amanda Cassatt, founder of Serotonin and former CMO of ConsenSys

"Short of getting into a time machine, it's hard to imagine how you'd get closer to capturing PayPal's rise—and understanding the lives of its creators. A brilliant book chock full of wisdom and lessons for business and life."
—Nir Eyal, bestselling author of Hooked and Indistractable

“This book is stunning in its depth and clarity, especially given the complexity of its subject matter: the intertwined early lives of some of the greatest innovators of the twenty-first century. I thought I knew most of the characters—particularly given how much they are covered in the news—but I was wrong. Jimmy Soni’s immense effort, which involved combing through 150,000 pages of emails and hundreds of interviews, unearthed not only new facts but also new layers of humanity that lie at the heart of the story. This is the rare book that combines deep research, powerful storytelling, and wit. Anyone who wants to understand how great things get built will benefit from reading it—and so will anyone who wants an inside look at brilliance.”
—Luke Burgis, author of Wanting: The Power of Mimetic Desire in Everyday Life

"Soni has written a brilliant origin story—the kind you want to read. He returns to the opaque beginnings, to the time before archetypes had formed around Elon Musk and Peter Thiel. He excavates the layers of technological history, human grit, and visionary genius that converged to form a world historical company."
—Natalie Elliot, science writer and professor at St. John's College

"The only business adventure I’ve ever read that made me feel like I saw into all the main characters' brains—along with seeing what they did. An absolutely addictive read."
—Brandon Kleinman, founder of Time Capsule and Showroom

“This deep dive into PayPal’s history will intrigue readers from the beginning. Soni, an award-winning author, had unprecedented access to Elon Musk and internal PayPal documents. Readers will be surprised by how much personalities, company culture, and people shape revolutionary innovation. Those with entrepreneurial spirits will want to add this to their reading list."
—Booklist

"A modern technology success story about the Silicon Valley innovators who developed one of the world’s largest payments companies. Combining historical detail with biographical perspective, Soni sifts through PayPal alumni to reveal the company’s origins and the risks it took to surpass both its predecessors and contemporary competition…A captivating examination of a significant consortium of tech pioneers.”
—Kirkus Reviews

Jimmy Soni is an award-winning author. His previous book, A Mind at Play: How Claude Shannon Invented the Information Age, won the 2017 Neumann Prize, awarded by the British Society for the History of Mathematics for the best book on the history of mathematics for a general audience, and the 2019 Middleton Prize by the Institute of Electrical and Electronics Engineers. His newest book is The Founders: The Story of PayPal and the Entrepreneurs Who Shaped Silicon Valley, and recently he completed with the late Jane Walentas, Jane’s Carousel, which captured one woman’s remarkable twenty-five-year journey to restore a beloved carousel in Brooklyn Bridge Park. He lives in Brooklyn, New York, with his daughter, Venice.
Loading...
or support indie stores by buying on