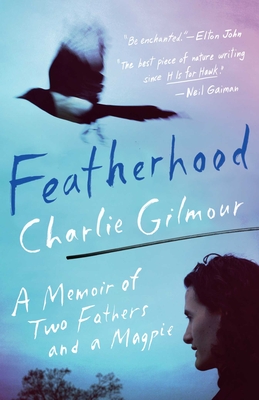 A Memoir of Two Fathers and a Magpie

“The best piece of nature writing since H is for Hawk.” —Neil Gaiman

​In this moving, critically acclaimed memoir, a young man saves a baby magpie as his estranged father is dying, only to find that caring for the mischievous bird saves him.

One spring day, a baby magpie falls out of its nest and into Charlie Gilmour’s hands. Magpies, he soon discovers, are as clever and mischievous as monkeys. They are also notorious thieves, and this one quickly steals his heart. By the time the creature develops shiny black feathers that inspire the name Benzene, Charlie and the bird have forged an unbreakable bond.

While caring for Benzene, Charlie learns his biological father, an eccentric British poet named Heathcote Williams who vanished when Charlie was six months old, is ill. As he grapples with Heathcote’s abandonment, Charlie comes across one of his poems, in which Heathcote describes how an impish young jackdaw fell from its nest and captured his affection. Over time, Benzene helps Charlie unravel his fears about repeating the past—and embrace the role of father himself.

A bird falls, a father dies, a child is born. Featherhood is the unforgettable story of a love affair between a man and a bird. It is also a beautiful and affecting memoir about childhood and parenthood, captivity and freedom, grief and love.

Praise For Featherhood: A Memoir of Two Fathers and a Magpie…

"Vivid ... when the writing turns to his present, multigenerational, blended family, bird included, the scenes are lush with the warmth and comfort of everyday living ... [Gilmour] is fearless in sharing himself with readers. As he works through his relationships, the emotional freight is not always subtle, but this comes from a generosity and openness on his part, which, ultimately, is what makes Featherhood so lovely and inviting."
—The New York Times

“This will undoubtedly be held up alongside H is for Hawk ... [A] work of magpie investigation that ranks among the best modern coming-of-age memoirs.”
—The Sunday Times and Times Memoir of the Year

"Engrossing ... At once droll and wise, this is an unforgettable memoir."
—Christian Science Monitor

"A moving account of [Gilmour's] attempts to make sense of his deeply complicated father while assessing his own suitability for fatherhood, wrestling with the question of nature versus nurture, all while caring for a magpie."
—The Times

"When the author decided to raise a baby magpie, he had no idea it would quiet his stormy emotions and help him reconcile with the father who'd abandoned him. Screeching, stealing, burying meat in Gilmour's hair, this bird is a winning heroine—delightful on paper, harrowing to live with."
—People

"With razor-sharp wit and storytelling, Gilmour interweaves the story of this bird, whom he and his partner named Benzene, with that of his past ... Featherhood represents the debut of a talented young writer reckoning with an unusual past."
—BookPage

"Thoughtful ... [an] intimate, entertaining story ... the book soars ... Featherhood is an incisive, funny and at times traumatic study of the damage done by destructive father-son relationships and the struggle to smash generational cycles."
—Evening Standard

"A profound exploration of grief, fragmented families, nature versus nurture and whether we are doomed to repeat the sins of our fathers. But it is also a gladdening celebration of what it is to nurture and bring forth new life."
—Sunday Express

“Gilmour’s language is as precise as his gaze is forensic. He is something of a magician himself, conjuring whole vivid personalities with a few deft strokes of his pen.”
—Daily Mail

"In a captivating memoir, Gilmour recounts his frustrating search for his father, Heathcote Williams, who abruptly disappeared when he was 6 months old ... Eventually, the author gained perspective on the causes of his father’s abandonment, and he assuaged his fears about his own mind: “who your father is,” he realizes, “isn’t who you have to be.” ... A sensitive, often moving chronicle of transformation for bird and man."
—Kirkus, starred review

"Born to write, Gilmour interweaves intimate observations of magpie behavior with bird science; an astonishing family history; psychological struggles ... His prose is as darkly iridescent as the magpie’s feathers, his wit is winged, and he is as tenacious in his gathering of memories and facts as the magpie is with food and objects. A resplendent interspecies memoir of nature, nurture, revelation, and love,”           —Booklist, starred review

"Moving . . . The author's introspection is rewarding without becoming maudlin, and his poetic take on the complexities of father/son relationships resonates. This spirited outing hits all the right buttons for memoir lovers."                              —Publishers Weekly

"Featherhoodis one of the best books I’ve ever read. I urge you to seek it out, buy it, and be enchanted. It's incredibly moving and I loved every single page."
—Elton John

"Wonderful – I can’t recommend it too highly."
—Helen Macdonald, author of H is for Hawk

“Featherhood is an astonishing achievement: a book about fathers and their children, about magicians and birds, about the hurt we pass on from generation to generation, and the ways we can try to heal. It's a journey that we take with a magpie, across the decades of Charlie's life, and the life of his biological father. It's the best piece of nature writing since H is for Hawk, and the most powerful work of biography I have read in years. It announces Charlie Gilmour as a major new writing talent, as he weaves words like a poet and offers us continual small treasures like a magpie.”
—Neil Gaiman

"A wonderful, moving book. The story of Gilmour’s family is deeply felt. His account of raising a young magpie offers a lovely insight into this fascinating bird. The two stories intertwine gracefully and perceptively, bringing solace and understanding with them."
—James Macdonald Lockhart, author of Raptor

“Featherhood, Charlie Gilmour’s miraculous account of his life raising a magpie, shows us that learning how to fly is as hard for a bird as it is for a young man, especially when that young man’s father weighs on him like a rock. Gilmour is a hero, for surviving the horrible storms he flew through before he met the magpie, and for the magic he glides through after.
—Robert Sullivan, author of Cross Country

"Featherhood is a good time in a weird way – I have never read anything so filthy."
—Nell Zink, author of The Wall Creeper

"I loved Featherhood. About nature and growth, about belonging and not belonging, it is beautiful."
—Andrew O’Hagan, author of The Illuminations

"What a breath-taking, beautiful book Featherhood is! Utterly absorbing, astonishingly well-written, full of heart.  It's the most arresting book I've read for a very long time, so original and glittering and true.  It's wonderful."
—Cressida Connolly, author of After the Party

"Beautiful, wise, compassionate and powerful, Featherhood is one of those rare, enchanted books that sings to the soul of what it is to be."
—Isabella Tree, author of Wilding

"What a book! I was entranced. It is so blood soaked and yet so warm, so beautiful, so hopeful. A personal reckoning which is simultaneously brutal and joyous. It’s full of light. I have that feeling I have with a very good book that I want to tell everyone about it."
—Cathy Rentzenbrink, author of The Last Act of Love and A Manual for Heartache

"Featherhood is a beautiful book, sensitive and compelling – it made me cry."
—Simon Amstell

“This stunning memoir flashes with as many colours as its enchanting subject, and draws us into a world of eccentric characters impossible to predict or forget. Savage, mischievous, moving, sublime.”
—Rhik Samadder, author of I Never Said I Loved You

Charlie Gilmour lives in South London with his wife and daughter.
Loading...
or support indie stores by buying on