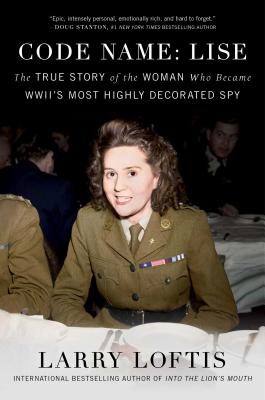 Lise: The True Story of the Woman Who Became WWII's Most Highly Decorated Spy

From New York Times and international bestselling author of the “gripping” (Michael Connelly, #1 New York Times bestselling author) Into the Lion’s Mouth comes the extraordinary true story of Odette Sansom, the British spy who operated in occupied France and fell in love with her commanding officer during World War II—perfect for fans of Unbroken, The Nightingale, and The Code Breaker.

The year is 1942, and World War II is in full swing. Odette Sansom decides to follow in her war hero father’s footsteps by becoming an SOE agent to aid Britain and her beloved homeland, France. Five failed attempts and one plane crash later, she finally lands in occupied France to begin her mission. It is here that she meets her commanding officer Captain Peter Churchill.

As they successfully complete mission after mission, Peter and Odette fall in love. All the while, they are being hunted by the cunning German secret police sergeant, Hugo Bleicher, who finally succeeds in capturing them. They are sent to Paris’s Fresnes prison, and from there to concentration camps in Germany where they are starved, beaten, and tortured. But in the face of despair, they never give up hope, their love for each other, or the whereabouts of their colleagues.

In Code Name: Lise, Larry Loftis paints a portrait of true courage, patriotism, and love—of two incredibly heroic people who endured unimaginable horrors and degradations. He seamlessly weaves together the touching romance between Odette and Peter and the thrilling cat and mouse game between them and Sergeant Bleicher. With this amazing testament to the human spirit, Loftis proves once again that he is adept at writing “nonfiction that reads like a page-turning novel” (Parade).

Praise For Code Name: Lise: The True Story of the Woman Who Became WWII's Most Highly Decorated Spy…

"This is a great book! ... A remarkable story. I hope someone's bought the movie rights." —The TODAY Show

“Reading like a thrilling spy novel and the most exciting sort of non-fiction—well researched, well written, and fast paced enough to keep the pages turning—this will interest fans of the history of espionage, World War II history, military history, women’s history, and biography.”—Library Journal (starred review)

“With evident sympathy, Loftis tells a well-researched, novelistic story of a heroine and patriot…Swift and entertaining, Loftis’s work reads less like a biography and more like a thriller.”—Publishers Weekly

"Extraordinary bravery ... made this woman one of World War II's most remarkable spies.  That she survived the war was almost miraculous."—TIME

"A story of sheer bravery and survival that should astound even an avid reader of military history.  A splendid read about a splendid woman." —Washington Times

"At last the unsung upstarts are getting their due. Sansom ... survived being burned and having her toenails pulled out. She never divulged the information the Germans wanted." —The Atlantic

“Continues the scholarly thriller style of Into the Lion’s Mouth.”—Orlando Sentinel

"Written in the style of a thriller, this is a thrilling account of the exploits of World War II’s most highly decorated spy, Odette Sansom."—Daily Mail (UK)

"Loftis brings history to life, shining a light on a truly remarkable woman, reminding us of her spirit, determination and courage… Bravo!"—Woman’s Weekly (UK)

"Incredibly brave, Odette showed super-human courage, intelligence and perseverance after she and the man she loved were captured.  Peter and Odette's love story is central to Code Name: Lise, [and] Loftis describes the depth of affection that unfolded between them as they risked their lives for their country."  —Daily Mirror (UK)

"Near the end of this wartime tale about a clandestine couple, you hope somebody will make a movie out of the thriller-like plot." —Military Times

"Fascinating ... A page-turner, especially the final third of the book which provides a riveting account of the mayhem of the final days of WWII ... Loftis’ meticulous research is evident throughout." —The Cipher Brief

"Readers will not want to put this book down...A spy thriller instead of a dry biography."—MilitaryPress.com

"[A] fascinating story of resistance and romance." —Daily Beast

"Nonfiction that is written like a novel ... If you like spy novels/biographies don’t miss this one." —Book Riot

"This is a well-written book, almost a romance novel, almost a horror story, almost a war story, that can leave the reader somewhat breathless. The author has that knack of shifting the emphasis onto another detail just when the narrative gets exciting. This enhances the book greatly ....  A cracking book from one end to the other." —NB Magazine (UK)

"Reads like a thriller and a romance, yet is solid history.” —Galveston County Daily News

"Captivating. Odette was one helluva fighter. Loftis is one helluva writer, who tells her story like a novel. ... I'm calling it now: This will be a movie." —Lauren Daley, South Coast Today

"Code Name: Lise is impossible to put down. Suffused with romance, told with a novelist’s eye for page-turning thrills and the historian’s acumen for facts, Loftis brings to colorful life a hero for our time, Odette Sansom.  Like Unbroken and Code Girls, Odette Sansom’s story is epic, intensely personal, emotionally rich, and hard to forget.”—Doug Stanton, #1 New York Times bestselling author of 12 Strong and In Harm’s Way

“Code Name: Lise is a grand adventure, part thriller, part love story, and full of wonderful details about the tradecraft of wartime espionage and the bravery of unsung heroes. A remarkable achievement that does honor to its subject. I hope someone takes it to the big screen as it has everything.”—Joseph Finder, New York Times bestselling author of The Switch and Judgment

"Larry has a knack for finding untold stories that read more like fiction than fact, and he's done it again with Code Name: Lise.  Having grown up reading about the Jedburgh teams - the forerunners of US Special Forces - I found the story riveting, not the least because it's true, and Larry's relentless research makes Odette Sansom's heroics leap off the page, putting her in the pantheon of our own Special Forces heroes."—Brad Taylor, New York Times bestselling author of Daughter of War

“Larry Loftis brings the past to life with a brilliantly researched and executed tale of one woman's unparalleled heroism in occupied France during World War II. A riveting true story of love, betrayal and sacrifice, as engaging as any thriller, and not to be missed.”—Mark  Greaney, #1 New York Times bestselling author of Mission Critical

“Larry Loftis has crafted a true thriller, a highly entertaining account of the most highly decorated spy of WW2. A great read.”
–Alex Kershaw, New York Times bestselling author of  The First Wave and Avenue of Spies

"Another masterpiece from Larry Loftis, the king of nonfiction thrillers. If you try just one nonfiction book this year, there's no question ... it should be this one."—The Real Book Spy

"Loftis's detail of Sansom's life reads like a spy thriller, but with the research of a nonfiction narrative, covering one of the best stories of clandestine heroism during the Second World War." —WeAreTheMighty.com

"Loftis keeps the action going at the pace of a novel—escapes, torturous Gestapo interrogations, even a little romance—all based on documents and recorded interviews. The result is a complex, grey-area world, with loyalties shifting and turning on a dime." —Beachcomber

PRAISE FOR INTO THE LION'S MOUTH

"Gripping ... This one will keep you planted in your reading chair from start to finish."—Michael Connelly, #1 New York Times bestselling author

"A work of non-fiction that's more thriller than biography."—USA Today

"A sensational book, telling a remarkable true story that few know, even those in the intelligence business. Written in the style of the best spy thrillers, the book is impossible to put down."—Michael Morell, CIA Director (acting 2011, 2012-13)

Larry Loftis is the New York Times and international bestselling author of the nonfiction spy thrillers, Code Name: Lise—The True Story of the Woman Who Became WWII’s Most Highly Decorated Spy, and Into the Lion's Mouth: The True Story of Dusko Popov—World War II Spy, Patriot, and the Real-Life Inspiration for James Bond, which have been published in multiple languages around the world. Prior to becoming a full-time writer, Mr. Loftis was a corporate attorney and adjunct professor of law. He can be found on Facebook, Twitter, Instagram, and at LarryLoftis.com.
Loading...
or
Not Currently Available for Direct Purchase