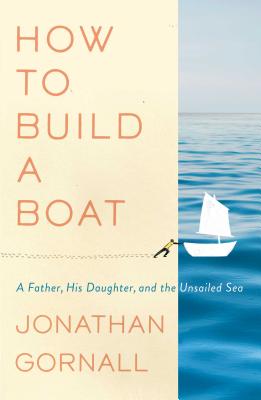 How to Build a Boat

A Father, His Daughter, and the Unsailed Sea

Part ode to building something with one’s hands in the modern age, part celebration of the beauty and function of boats, and part moving father-daughter story, How to Build a Boat is a bold adventure.

Once an essential skill, the ability to build a clinker boat, first innovated by the Vikings, can seem incomprehensible today. Yet it was the clinker, with its overlapping planks, that afforded us access to the oceans, and its construction has become a lost art that calls to the do-it-yourselfer in all of us. John Gornall heard the call.

A thoroughly unskilled modern man, Gornall set out to build a traditional wooden boat as a gift for his newborn daughter. It was, he recognized, a ridiculously quixotic challenge for a man who knew little about woodworking and even less about boat-building. He wasn’t even sure what type of wood he should use, the tools he’d need, or where on earth he'd build the boat. He had much to consider…and even more to learn.

But, undaunted, he embarked on a voyage of rediscovery, determined to navigate his way back to a time when we could fashion our future and leave our mark on history using only time-honored skills and the materials at hand. His journey began in East Anglia, on England’s rocky eastern coast. If all went according to plan, it would end with a great adventure, as father and daughter cast off together for a voyage of discovery that neither would forget, and both would treasure until the end of their days.

How to Build a Boat celebrates the art of boat-building, the simple pleasures of working with your hands, and the aspirations and glory of new fatherhood. John Gornall “tells the inspiring story of how even the least skilled of us can make something wonderful if we invest enough time and love” (The Daily Mail) and taps into the allure of an ancient craft, interpreting it in a modern way, as tribute to the generations yet to come. “Both the book, and place, are magical” (The Sunday Telegraph).

Praise For How to Build a Boat: A Father, His Daughter, and the Unsailed Sea…

“From struggle and suffering comes beauty. From countless mistakes, ounces of spilled blood and gallons of sweat comes something simple and enduring; practical yet elegant . . . This is where Gornall shines. Like every parent—no, more than most—he is fixated on what he will leave behind . . . He wants to leave his child an ark. Not the Noah kind, but the Moses kind. A tangible vessel to hold timeless truths . . . It is when he directly addresses Phoebe that Gornall truly sets sail . . . I am grateful as a father that a dad has put into words and wood the fathomless love a parent has for a child.”
—New York Times Book Review

“Beautifully documents the year [journalist Jonathan Gornall] spent building a wooden boat for his young daughter . . . Owning almost no tools and having no woodworking skills, Gornall, living on England’s eastern coast, gave himself a crash course . . . [His] prose is amusing, personal, and informative . . . [He] acknowledges he has ‘created a vessel of a father’s love, a gift to inspire his daughter.’ The very same can be said of his book, a testament to hard work and a soft heart.”
—Publishers Weekly

“Engrossing . . . Gornall lends depth to the story with engaging bits of boat history, recollections of his two aborted attempts to row across the Atlantic Ocean, and a surprisingly compassionate account of growing up with an emotionally distant, alcoholic single mother. But the most touching emotions are the author's fervent, overriding love for his daughter (with the boat as its embodiment) and his regret that he had not been more of a father to his now-grown son. . . . At its best, Gornall's prose is buoyant and watertight and his book shipshape.”
—Kirkus Reviews

“With delightful self-deprecating wit and the enthusiasm of a devotee, Gornall recalls his massive undertaking, celebrating the kindred spirits who signed on to help him on his way, the history of traditional boatbuilding, and even the mercurial attention his daughter pays to the project. With all the pitfalls and setbacks Gornall experiences along the way, his commitment to his one-of-a-kind gift makes for an inspiring journey.”
—Booklist

“Both the book, and place, are magical.”
—The Sunday Telegraph

“Tells the inspiring story of how even the least skilled of us can make something wonderful if we invest enough time and love.”
—The Daily Mail

“The passages Gornall addresses directly to [his daughter] are as tender as the father-daughter letters in Karl Ove Knausgaard’s Seasons Quartet.”
—Times Literary Supplement

“In an age of instant everything, this is a charming book about handcrafting something that does not arrive in a cardboard box and snap together. It is a story about taming impatience, facing fears, and softening skepticism. With love as a motivation, each of us may undertake things that seem impossible.”
—Tori Murden McClure, author of A Pearl in the Storm, and the first woman to row across the Atlantic Ocean

“This rich, beautifully crafted book is funny, heart-warming and stuffed to the gunwales with fascinating information. Jonathan Gornall’s quest to build a sailing boat navigates the crosscurrents of his life story—the challenges of fatherhood, his difficult relationship with his mother, his lifelong love of the sea. It’s a compelling narrative that sweeps us along as Gornall battles his demons while simultaneously tackling the tough physical challenges of building a vessel from scratch.”
—Benedict Tufnell, Editor of Row360 magazine

“An utterly captivating, richly poetic account of building a traditional wooden boat for the first time—and a paean to the awesome responsibility and reward of fatherhood.”
—Matthew P. Murphy, Editor, WoodenBoat magazine

“Being a parent, a sailor and an occasional DIYer, I know that boat building, like fatherhood, is not for the faint of heart. Packed with details, both historical and personal, How to Build a Boat wonderfully captures the tensions, the tightrope walk between reward and dismay. In the end, I wanted to cheer: the boat floats and a daughter's adventures can begin.”
—Mark Pillsbury, Editor of Cruising World

Jonathan Gornall is an award-winning freelance journalist, whose writing has appeared in The Daily Mail and The Times (London). While at The Times, he was the author of a weekly column, “Microwave Man,” that looked insightfully, and often humorously, at the role of man in the modern world. He published a book of the same title in 2006. He has twice attempted to row across the Atlantic, and lives on England’s east coast with his wife and daughter.
Loading...
or
Not Currently Available for Direct Purchase