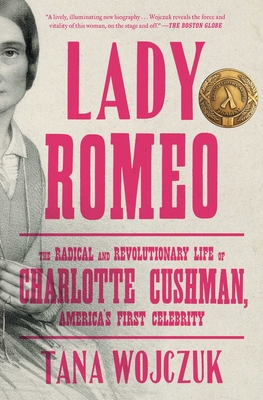 For fans of Book of Ages and American Eve, this “lively, illuminating new biography” (The Boston Globe) of 19th-century queer actress Charlotte Cushman portrays a “brisk, beautifully crafted life” (Stacy Schiff, bestselling author of The Witches and Cleopatra) that riveted New York City and made headlines across America.

Now, her story comes to brilliant life with Tana Wojczuk’s Lady Romeo, an exhilarating and enlightening biography of the 19th-century trailblazer. With new research and rarely seen letters and documents, Wojczuk reconstructs the formative years of Cushman’s life, set against the excitement and drama of 1800s New York City and featuring a cast of luminaries and revolutionaries who changed the cultural landscape of America forever. The story of an astonishing and uniquely American life, Lady Romeo reveals one of the most remarkable forgotten figures in our history and restores her to center stage, where she belongs.

“A lively, illuminating new biography… Wojczuk reveals the force and vitality of this woman, on the stage and off.” —THE BOSTON GLOBE

“[A] galloping, atmospheric account of a remarkable woman: the first real American celebrity… It’s a thrill and an inspiration to come to understand Cushman’s bold aplomb in the pages of Lady Romeo.” —CHICAGO REVIEW OF BOOKS

“Lady Romeo is a brisk read, packed with cinematic details and a smattering of Easter eggs sure to delight even the most hardboiled history buff.” —AUTOSTRADDLE

“Queer history stories can be worthy, but too scholarly, even snooze-inducing. Or they can grab you by the lapels and jolt you awake like a double shot of espresso. Lady Romeo: The Radical and Revolutionary Life of Charlotte Cushman, America’s First Celebrity by Tana Wojczuk will keep you up at night. Turning the page – hungering for more. . . Wojczuk, brings Cushman, who lived from 1816 to 1876 and was as famous as Alcott, Ralph Waldo Emerson or Charles Dickens, vividly to life. As you read, you forget that you live in the 21st century.” —THE WASHINGTON BLADE

"The name Charlotte Cushman may not mean much today, but in the mid-1800s she was a prominent stage actress who specialized in Shakespearean roles from Lady Macbeth to Romeo (her sister played Juliet). Cushman was also openly gay and her radical lifestyle and many same-sex relationships were the stuff of scandal. Wojcuzk's carefully researched biography, which draws heavily on Cushman's letters, paints a fascinating portrait of a true trailblazer." —NEWSDAY